The definition of insanity (in·san·i·ty

/inˈsanədē/) is doing the same thing over and over and expecting different results. – Albert Einstein.

What would Albert Einstein say about the Dallas Cowboys? More importantly, what do those who cheer a long ago champion say about the Cowboys and their owner/general manager Jerry Jones? After a Sunday afternoon playoff loss in San Francisco, Jones watched something familiar, as Dak Prescott spent a day turning the ball over and demonstrating he’s not a starting quarterback. The last play of the carnival that is the 2022 Dallas Cowboys was Prescott trying to execute a ridiculous play that had him part of the turf at Levi’s Stadium.

With Jones looking on in abject confusion from the owner’s box, his son Stephen Jones, wife, and other hangers-on watched as the wreckage unfolded. For fans, it was further affirmation that Prescott needs to go, and that Jones simply doesn’t get it.

So, where does the owner of “America’s Team” go now? It’s worth noting that the NFL needs the Dallas Cowboys. They are the standard-bearer for the league, and the top sports brand in the country. They are bigger than the New York Yankees, and Los Angeles Lakers. They are global. Not being able to win a championship is a big deal. Jerry Jones made this mess, and it’s time he made the hard decisions such a brand brings with it.

#Cowboys Ezekiel Elliott is the 3rd highest-paid RB annually for 2023.
Tony Pollard is a free agent that will need paid.
If the #DallasCowboys part ways with Zeke they can save $10.9 M in cap space. pic.twitter.com/h6gEMWz2RD

First, they have little cap space to work with. Restructured deals with Prescott and Zack Martin freed up some needed cash, and the potential of moving running back Ezekiel Elliott is something Jones has to consider and not allow his heart to be pulled the other way on. The Odell Beckham Jr. rumors need to remain “rumors” and free agent moves will need to be prudent and not “gut reactions”.

One player who is an absolute necessity is backup quarterback Cooper Rush, who was solid in relief of Prescott when he went down with an injury. He managed to win four of the five starts he made, and kept the Cowboys in play for what was a brief postseason.

Head coaching is always a tough and lengthy conversation when it comes to doing business in Dallas. Jones has made himself the face of the organization, pushing the media to focus less on any player or story to instead focus on the owner. It also hasn’t worked. His decisions routinely are bad for the Cowboys. When he first purchased the team, he was more a P.R. man while head coach Jimmy Johnson built a behemoth. But as history has shown, Jones took a blow torch to a Super Bowl winning team.

30 years ago today, Jerry Jones bought the @dallascowboys and made it very clear what the goal was. pic.twitter.com/5MJw48mn06

So, is Mike McCarthy the future in Dallas? He’s already received the requisite vote of confidence despite an ugly finish in San Francisco. The question is, can Jones allow anyone but a “yes man” to coach the team? Say, someone like Sean Payton?

With Jerry Jones, the head coaching job of the Dallas Cowboys is only slightly better than the now deceased George Steinbrenner days in the Bronx. While Steinbrenner was all bluster, Jones is something of a carnival barker. So, any coach in Dallas is on borrowed time the moment they sign a contract.

Payton has always been linked to Dallas since he was an offensive coordinator on Bill Parcells’ staff from 2003-2005. It’s always seemed like he was destined to be the head coach for the Cowboys. Additionally, a job with the biggest sports brand in the world is a big deal. Taking them to a championship would be the crowning achievement of a guy who found a way to win in New Orleans. For Jones, it’s a conversation worth having, and for Payton, it’s the signature job in all of sports.

It would also force the hand of Dak Prescott. Jones pays him like a franchise type quarterback without the return. Sunday afternoon in San Francisco was a reminder of the overwhelming marginal play he provided. His decision-making is poor, and is akin to quarterbacks who aren’t going to help a team win a Lombardi Trophy. He isn’t Patrick Mahomes, or Josh Allen, or Joe Burrow. His “flashes” aren’t the kind that are sustainable for any prolonged success, and if his interception rate of 3.8% in 2022, nearly doubling a career average of 2.0%, is an indicator, then what can fans look forward to? Maybe the “Prescott issue” alone is worth a phone call for some much-needed advice.

With the 2022 Dallas Cowboys season squarely in the rearview mirror, the one constant from all the past seasons leading to the one just concluded, is that the combination of Dak Prescott and Jerry Jones won’t ever win a Super Bowl for fans in the Metroplex. It’s bad for them, it’s bad for fans, and it’s bad for the NFL. 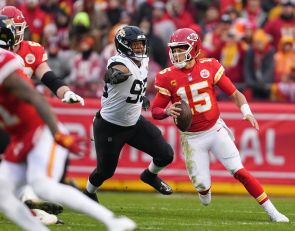 The Most Underappreciated Plays from the 2023 NFL Divisional Round