The Los Angeles Lakers continue their road trip and head to the Wells Fargo Center for a battle with the Philadelphia 76ers. Tip-off is scheduled for 7:30pm EST between the two teams.

The Lakers come into this game having an up and down season so far. They has a disastrous start to the year but have since picked up ground in the standings. They enter this with a record of 10-14 and still have some work to do in their process. Los Angeles should be getting some reinforments back for this game in LeBron James and Anthony Davis after they sat out last time out with injury and illness.

This matchup showcases Davis and 76ers Joel Embiid. Two of the best bigmen in the NBA and whenever these two matchup, it’s always a must watch. The two players tend to bring out the best in one other competitively so get the popcorn out for this one.

The 76ers just got guard James Harden back recently and hopefully can now finally go forward with a healthy team. They have gone 12-12 this season but we haven’t truly been able to judge them with Harden missing games. They are still a force with Embiid at the helm and going against a Lakers team that struggles with rebounding, it could be a field day for him on the boards.

I think the Lakers find a way to win this game tonight. They have started to play much better of late and given that Harden is just coming back, I think Los Angeles can take advantage of that and steal a game on the road here. 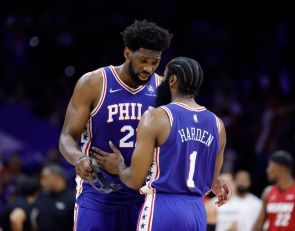