Could Baker Mayfield Save the 49ers?

Could Baker Mayfield Save the 49ers?

Jimmy Garoppolo said his goodbyes to the fans of the San Francisco 49ers after the conclusion of the 2021 season. Nearly everyone, including Garoppolo, expected him to be playing elsewhere in 2022. However, Jimmy G ended up staying in the bay to back up the young Trey Lance. Garoppolo was set to be a luxury backup for one of the best rosters in the league. Unfortunately, Lance’s season came to an early end in week two due to an ankle injury.

This provided Garoppolo the opportunity to become the starter once again and he made the most of it. He led the niners to a 7-4 record going into week 13 and had them being talked about as Super Bowl contenders. Just as things were looking great, disaster struck for the 49ers once again. Garoppolo suffered a season-ending foot injury, putting Brock Purdy in the driver’s seat of an offense with unmatched talent.

Purdy is unproven in the NFL and it doesn’t seem overly likely that he is the guy to lead a team with Super Bowl aspirations. The 49ers also brought in a true journeyman, Josh Johnson, after the injury. Again though, he won’t take them to the Super Bowl. So if not either of them, then who?

There are rumors out there that the Carolina Panthers will be releasing Mayfield. The former number one overall pick struggled this season, accruing 1,313 passing yards to go with a six to six touchdown to interception ratio.

Despite a bad run of form, I still believe he can be an effective quarterback given the right team around him. There is no better fit for him than the 49ers currently. With former teammate Christian McCaffrey at running back, Deebo Samuel and Brandon Aiyuk lining up outside, and George Kittle at tight end, he would have weapons galore.

At times, Shanahan’s offense with Jimmy G under center seemed to be made to limit the possibility for mistakes. Something similar could work wonders with Mayifeld. He needs to rebuild his confidence if he is to have a future as a starting quarterback in the NFL and there’s no better place to do it. If the 49ers are serious about making a run at securing another Super Bowl berth, Baker Mayfield may be their best chance. 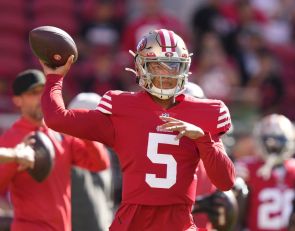