Seniesa Estrada is the Future Face of Women’s Boxing

Seniesa Estrada is the Future Face of Women’s Boxing

When it comes to the top women boxers, the names that typically come up are Clarissa Shields, Katie Taylor, Amanda Serrano, and Alycia Baumgardner. There is one boxer on the rise that deserves more mention at the top.

That boxer is Seniesa Estrada. The beginning of Estrada’s passion for boxing came when she was six years old watching fights and going to the gym with her father, Joe Estrada. She started partaking in the training with her father, and with her first sparring match, she beat a boy in the ring at the age of eight. Estrada took the punches, didn’t quit, and instead it led to her getting a boost as she responded with a flurry of punches that led to coaches having to stop the fight. This launched the vision for her professional career, as she went on to partake in over 100 amateur fights, only losing five of them. Her first professional fight came in 2011 against Maria Ruiz, in which Estrada gained a unanimous decision win.

What makes Estrada such a unique fighter is how she is able to confuse her opponents with ease. During her matches, she can switch from southpaw to orthodox effortlessly, leading to opponents having to account for both fighting styles. In addition, it is also the true power she possesses at only 105 pounds. That was on full display in her match against Miranda Adkins as Estrada knocked her out in seven seconds, which is the fastest knockout in women’s boxing history.

This win set Estrada up for a shot against then WBA Strawweight champion Anabel Ortiz on March 20, 2021. This was the 13th title defense for Ortiz, as she had held the belt for seven years. Yet in the fight, Estrada looked as if she was already the champion. She was the aggressor in the first round, looking more confident and forcing Ortiz to fight cautiously. That carried over into the second, and despite taking a clip by a counter right from Ortiz, Estrada was able to come right back with a straight right on the chin that produced the first knockdown of the fight. As the fight continued, the offense from Estrada was too much for Ortiz to handle, wearing her down blow-by-blow until the final bell. Estrada won via unanimous decision to become the new champion.

Since winning the championship, she had only defended the title successfully once against Maria Micheo Santizo on December 18, 2021. That fight would be her last fight for 11 months, as her and Golden Boy Promotions would enter a contract dispute. The contract was finally severed in July, and she moved on to sign a multi-year deal with Top Rank. This contract with Top Rank makes her only the second female boxer they have under contract, joining Mikaela Mayer. On Saturday, November 12, it was the first fight of this new contract against Jazmin Gala Villarino.

Villarino came into the fight with a 6-1-2 record, with her loss being in her debut in 2016. With 11 months of inactivity, if Estrada would be able to come in and look as dominant as she had been before was up in the air. The bout proved that she could, as Estrada outclassed Villarino throughout the entire 10 rounds. Villarino matched the aggression of Estrada early on with her heavy overhand right. Estrada was able to maneuver around the flurry of punches and followed it up with three- and even four-punch combinations. Estrada did an impressive job throughout the fight to land an array of power shots, uppercuts, and hooks to both the body and chin of Villarino. Estrada landed 210 punches compared to the 121 of Villarino, as the fight went to the scorecards, it was Estrada walking away with the 100-90 unanimous decision victory.

After the win, Estrada came out with a powerful message, saying “I just want to tell all girls and all women in sports to always believe in yourself and always believe in what you can do and always go after what you want. I might’ve been slowed down, but I can’t be stopped. This is what I was born to do. This is the talent God has given me, and this is my destiny, and you cannot stop destiny”.

Estrada went from being the only girl training in an East Los Angeles gym to now having a 23-0 record, with nine wins being via knockout. It was a great debut fight for the Top Rank fighter, and Top Rank can put together plenty of fights to help continue to launch her to the top. There is the potential for one against Yokasta Valle who holds the IBF and WBO belts in her division at strawweight, Evelyn Bermudez at junior flyweight who holds the IBF and WBO belts, or Marlen Esparza at flyweight, who Estrada has already beat, holding the WBA and WBC belts. The future is bright for Estrada with her fighting style and passion as she continues her climb to becoming the future face of women’s boxing. 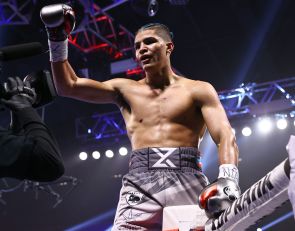 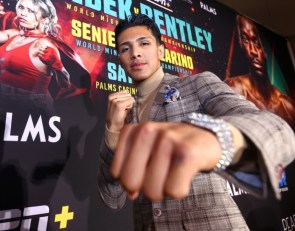