Passing Leader: Joe Burrow
Joey B is that guy. Week in and week out, Burrow is consistently proving that he should be in the conversation of being amongst the elite quarterbacks of the NFL, and has cemented a spot in many people’s minds. Although the Titans are 7-3, I have no doubt in my mind that Cincinnati will make easy work of the rather fraudulent team, and expose a lackluster Tennessee defense. In a huge game for the AFC playoff picture, expect Burrow to finish the day with 300 passing yards and three touchdowns, leading his team to a victory.
Rushing Leader: Jonathan Taylor
Jonathan Taylor revenge tour? The 2022 consensus fantasy football #1 overall pick who’s made owners around the world regret their choice, has returned from injury with two fantastic performances under a new coaching staff, and should 100% see a third. Pittsburgh is nothing to be scared of for the Colts rushing attack, and in all honesty, JT28 can really save some playoff hopes if he continues this run. HE WILL lead the NFL in rushing this week with 130 yards and a pair of touchdowns.
Receiving Leader: Tee Higgins
With uncertainty surrounding JaMarr Chase’s availability on Sunday, bank on Tee Higgins to fill the void and be on the receiving end of Burrow’s masterclass. Higgins had a huge week against Pittsburg snagging 148 yards and nine receptions. As I like to say, hot players stay hot, and Tee Higgins will play to the level of this temporarily elevated role with an injured Chase. 120 receiving yards and a touchdown to go along with it sounds just right for the former Clemson Tiger.
Sacks Leader: Zadarius Smith
It’s Thanksgiving, so expect Zadarius Smith to eat up and attack this Patriots offensive line. When you look at the circumstances, it’s a prime time game on a major holiday, and the Vikings are coming off of an embarrassing loss to Dallas. This should all contribute to a Minnesota team that’s fired up, and ready to take advantage of an easier matchup, in a classic example of a get right game. This will lead to a two sack performance from Zadarius himself.
Happy Thanksgiving everyone! 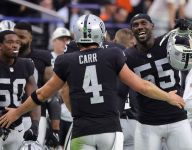