The red hot New Jersey Devils continue their Western Canada road trip as they make their stop in Edmonton. Both the Oilers and the Devils are coming off win streaks as they look to assert their dominance in the league. The Oilers with the dynamic duo of Connor McDavid and Leon Draisaitl have been torching teams, affirming their place as the best duo in hockey, While the Devils collect a team effort on a nightly basis to outshoot every team they play, placing 30+ shots each night. Two offensive juggernauts with tons of speed going head-to-head should bring for an amazing Thursday night matchup.

Through only two matchups last season, each team took a win against the other. A whopping 20 goals were scored in just two games against each other. Proving just how dynamite each team is on the offensive side of the puck. The Oilers want to repeat the success they had last year making it all the way to the Western Conference Finals for the first time since 2017. The Devils after years of rebuilding, have hopes of coming back to the playoffs after a short-lived stint in 2018. Each team has had an impressive start to the year, but the Devils earn the edge with just how far they’ve come since last year.

For the Devils, Jesper Bratt is the player to watch. Bratt is chasing records tonight, as he looks to break the longest point streak to start a season. Tim Higgins currently holds the record for the franchise, having had a point streak to start a season with 10 games. A former 6th round pick, Bratt has evolved into one of the best wingers in the NHL. Bratt only sits behind Leon Draisaitl for second in the league in assists with 12. Bratt has 16 points on the year and doesn’t seem to be slowing down. His playmaking brings up the players around him, and makes a young core in New Jersey super strong.

For the Oilers, it’s Leon Draisaitl. I would be dismissed if I undermined just how amazing McDavid has been to start this new year. Already leading the league in points and goals, McDavid is phenomenal. But Draisaitl deserves a ton of credit. The wingman to McJesus, Drai has been exemplary for the Oilers so far this year. He leads the league in assists with 16, scored five points last game against the Predators, and now has nine points in his last three games. McDavid is generational, but rest assured, the Oilers wouldn’t be as successful as they have been without Draisaitl to compliment this roster. 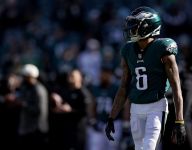