The Oilers start a brief road trip in Chicago against the struggling Blackhawks. Puck drop is scheduled for 9:38 p.m. EST.

Edmonton has been up and down this season and bring a 12-10-0 record into tonight’s contest. The fourth-place team in the Pacific Division is led in scoring by Connor McDavid. The captain’s 17 goals lead Edmonton and ties him for second in the NHL while his 39 points leads both categories. Leon Draisaitl trails McDavid in both goals and points but still has registered 13 goals and 33 points. Stuart Skinner has been the better goaltender between him and Jack Campbell. Skinner has a 5-5-0 record with a 2.80 goals against average and a .919 save percentage in 11 games played.

The Blackhawks have been awful in its last 10 games. Chicago has seven in a row and nine of its last 10 games. The Hawks are led offensively by the veteran Jonathan Toews who has eight goals this season. The only other two players with more than five goals are Andrea Athanasiou and Taylor Raddysh. Patrick Kane leads the Blackhawks in points with 16 in 21 games. Kane is followed by Max Domi (14), Toews (13) and Philipp Kurashev (11). Chicago has cycled through four different goaltenders so far this season. Alex Stalock has been the best of the bunch registering a 3-2-1 record with a 2.93 GAA and a .914 SV% in seven games.

Chicago took two of three matchups from Edmonton last season, but the Oilers salvaged three of six possible points. Edmonton captured the first meeting between the sides this season with a 6-5 win. The projected starting goaltenders for tonight’s game are Skinner for the Oilers and Arvid Soderblom for Chicago. 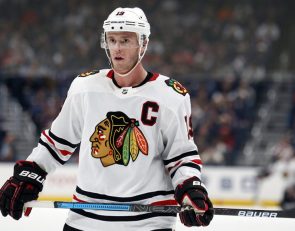 What's Next For the Chicago Blackhawks?