Deion Sanders is in play for a head coaching gig someplace in 2022. The Colorado Buffaloes have extended an offer, which Sanders has confirmed, but whether he would go to a program who needs a rebuild to get back to respectability and Bowl games, it might be a better job at Jackson State.

Sanders has made it no secret how much he enjoys the challenge and atmosphere at Jackson State. He has the Tigers 11-0 this season and will play Southern in the SWAC Championship on Saturday.

The two-time Super Bowl champion has had the kind of career that immediately attracts attention. As such, he’s been able to recruit extremely well and has a full cupboard of talent. By all appearances, this has made him more likely to stay at a school that he has described as a “match made in heaven”. Still, Sanders is quick to note that there are significant disadvantages when recruiting and winning at an HBCU institution. Citing housing, aesthetics at HBCUs, and perpetual underfunding, the long haul can be longer and harder than he’d find at a Power-5.

Colorado finding a way to convince Sanders to come to Boulder and take over a beleaguered program would be a monster move on the major college football scene. His presence would bring immediate and much needed visibility. Recruits would take a look at a program with the kind of head coach and his NFL lineage and know they would be in a “Prime” situation. With the pending departure of Flagships USC and UCLA, he would have an opportunity to put the Buffaloes back on the map and in play for NY6 Bowl games sooner rather than later. He would become not just the face of Colorado football, but the face of the soon to be PAC-10. The conference would quickly be able to be an attraction for teams who want to become members, and TV and media revenue would receive a much needed shot in the arm.

Win-win right? Maybe, maybe not. Michigan State is likely to be open in 2024, and the bottom line is it is a conference regularly in play for big bowl games and teams who get to the playoff. Bottom line is that Colorado needs Deion Sanders more than Sanders needs the Buffaloes. At the end of the day, he has time on his side, and he can take as long as his heart desires. 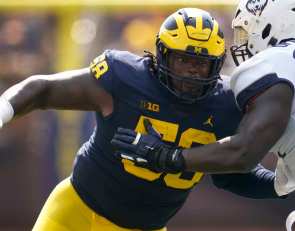