Well, that was disappointing. The Kentucky Wildcats took their first loss of the season to the Ole Miss Rebels on Saturday. In a game that was a total mixed bag for the Wildcats, there were some winners and losers.

Holy cow. Barion Brown is electric with the ball in his hands. The true freshman wide receiver could not be contained in the return game. He returned three kickoffs for 164 yards and almost scored on two of them. He also caught two passes for 81 yards. His efforts earned him SEC Co-Freshman of the Week for the second week in a row. As he is gaining confidence, he is looking more and more unstoppable.

Speedster @BarionBrown is the @SEC Co-Freshman of the Week for the second week in a row.

Our WR and returner racked up 245 all-purpose yards on five touches on Saturday.

I don’t particularly like to pick on individual players. Football is the ultimate team game. However, the Kentucky quarterback made some costly mistakes at big moments in the game. He ultimately fumbled the ball on Kentucky’s last two possessions, costing them the game. The second fumble came with 51 seconds on the clock, immediately after a touchdown was taken away due to illegal motion. The illegal motion was a result of Levis not waiting for everyone to get set on the line of scrimmage. They should’ve won the game in the final seconds. Levis was not the reason they lost by any means, but his crucial mistakes were hard to overcome.

Kentucky scored a game-winning touchdown, but it got called back due to a penalty.

The next play was a fumble by Will Levis to lose the game 😬pic.twitter.com/67RstHxtcJ

WINNER: Defense As A Whole

Kentucky’s brand of “Bend Don’t Break” defense was on full display vs. Ole Miss. After a rocky start, they rebounded extremely well. After allowing back-to-back touchdown drives in the first quarter, Brad White’s bunch gave up two field goals the rest of the way, including only three in the second half. The Kentucky defense held Lane Kiffin’s explosive offense to less than 400 yards and less than five yards per carry. I expect that won’t happen very often for the Rebels.

UK allowed Quinshon Judkins to get loose a few times, but an overall solid performance against one of the top rushing offenses in college football.

As stated earlier, I prefer not to pick on single players. However, Lane Kiffin and Jaxson Dart continually picked on Carrington Valentine to little resistance. Rebel wideout Malik Heath had his best day of the season as he went for 100 yards on six catches, and it felt like it was consistently against Valentine. Ultimately, Carrington Valentine has had a phenomenal season and there is no reason to believe this will continue. He will get better from this performance.

This was a game that Kentucky could have, no, should have won. They couldn’t get out of their own way, and they lost. The Wildcats continue their season at home next week when Shane Beamer’s South Carolina Gamecocks make a trip to Lexington. 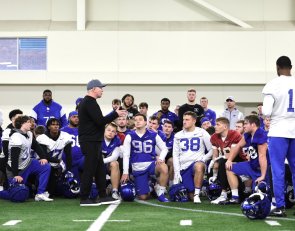