UNLV transfer Jacoby Windmon has been an instant difference maker for the Michigan State Spartans’ defense. He was used more as an off-ball linebacker with the Rebels, but has been deployed almost exclusively as an edge rusher with Michigan State. He already has 5.5 sacks and five tackles for a loss through five games. He now matches up with two potential first round offensive tackles in Paris Johnson Jr. and Dawand Jones. Windmon has an opportunity to prove himself as one of the nation’s top senior edge prospects and cement himself in day-two draft discussions. (Andrew Little)

There is a huge Big 12 matchup this weekend, and for once, it is not Texas vs. Oklahoma, it is undefeated TCU taking on undefeated Kansas. The Jayhawks have put up the most points in the Big 12 with 208 and are averaging 41.6 per game. Jalon Daniels has taken over that offense and has thrown for 11 touchdowns so far, so it will be up to Tre’Vius Hodges-Tomlinson to slow down that passing attack. Hodges-Tomlinson has been underrated, but possesses that talent to be considered in the first round of the 2023 NFL Draft. He is extremely athletic, and it shows in multiple ways. Hodges-Tomlinson has shown the ability to mirror receivers and that he has the quickness to stay with them down the field as well. He even has an insane reaction ability that he pairs with being able to sink his hips to change direction and get to where he needs to be to make a play on the ball. In a battle of two top 25 teams, keep an eye on the impact Hodges-Tomlinson makes. (Marissa Myers)

BYU loves to pass the ball, Notre Dame plays great pass defense. Something is bound to break this week, and much of that relies on Notre Dame safety Brandon Joseph. BYU and Jaren Hall will look to try to avoid Joseph, but his play making ability is going to make that hard. Joseph is allowing a 37% completion rate this year with a 68.2 QBR and four pass breakups. He’s a phenomenal coverage guy, with speed to take away the deep ball and get from sideline-to-sideline. Marcus Freeman will no doubt put him in a spot to win this week, Joseph is already a potential first round pick and will have another chance to raise his stock against an explosive BYU offense.(Tristen Kuhn)

The Kansas Jayhawks are undefeated and hosting College GameDay for the first time in their history, thanks in part to quarterback Jalon Daniels. Daniels has been nothing short of a superstar in 2022. Completing 68% of his passes for 983 yards and 11 touchdowns. He’s added 329 yards and another five touchdowns on the ground. This week, he’s going against a stout TCU defense, who held Oklahoma to 24 points in a surprising upset. Daniels is a smaller quarterback, 6’0, 215 pounds, but he has impressed during every game this season. He has a chance to push his name up draft boards if he can take care of business against the 17th ranked Horned Frogs on Saturday. (Kyle Smith)

The 2021 Biletnikoff Award winner (nation’s top receiver) has built on last season’s phenomenal campaign. After making the transfer from Pittsburgh to USC, Jordan Addison has done nothing but thrive for his new team. Through five games, Addison has gathered six touchdowns and 442 yards on 29 receptions. From a draft evaluation standpoint, his stature will not blow you away. He isn’t the biggest receiver out there, nor is he the strongest. You won’t mistake him for Calvin Johnson. However, I don’t envision this being too big of an issue at the next level. At worst, he is a great slot guy. On the flip side, he is a savvy route-runner, and he possesses elite run-after-catch abilities. He has tremendous body control and always manages to make things look easy. For my money, Jordan Addison has as good an argument as anyone for wide receiver one entering this draft cycle. He is a special talent. (Gavin Downard)

Heading into the 2021 season, Phil Jurkovec had a chance to be one of the draft’s biggest risers, but injuries limited him to six games. When evaluating quarterbacks, Jurkovec has a lot to like. He’s 6’5, and gutsy, with a lot of natural gifts that make him projectable at the NFL level. But, he’s still raw and does come with some questions. He and Zay Flowers are one of the best quarterback/receiver duos in the nation. Against a top-five opponent with two potential top-10 picks on this defensive line, can Jurkovec use his natural gifts to raise Boston College to a historic victory? Honestly, probably not. However, with some standout plays and if he showcases his talent, he can definitely make a statement to NFL decision makers. (Shaun Chornobroff) 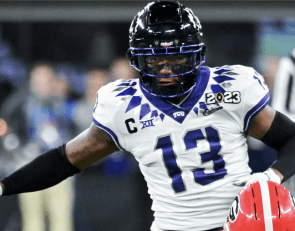 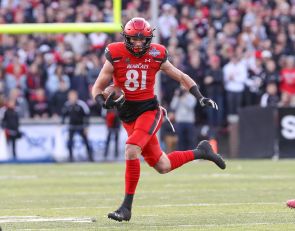 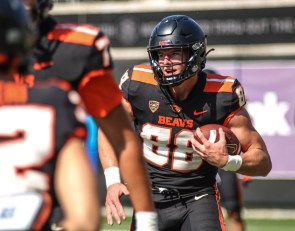