During the long grind that can be an NFL season, trends will emerge. Combined with the ‘eye test’, and now seven weeks into their respective campaigns, the teams you watch are also the teams they are. On Thursday Night Football, the bigger question this Friday morning is are the Arizona Cardinals this good and are the New Orleans Saints that bad? The final score of 42-34 isn’t representative of the absolute beat-down the Saints experienced last night in Arizona.

There is a reason Dalton is a backup

In 2014, the Cincinnati Bengals made a decision to sign Andy Dalton to a six-year extension valued at $155 million. Bengals watchers still have it correct today. Dalton struggles to diagnose pressure before the snap and does a poor job of figuring out what is coming at the offense when defenses disguise their blitz packages. where it really goes south is when he looks to bail on the pocket without resetting his feet and makes a throw likely to be an interception. Dalton can and will throw for gaudy numbers. Against the Cardinals, he threw 47 times completing 30, for 361 yards, four touchdowns and three interceptions. Two of those resulted in touchdowns for Arizona.

This time it’s Isaiah Simmons for the Cardinals!#BirdCityFootball

Again, there is a reason many were surprised when the Cincinnati Bengals buried their head in the sand, but the nonpartisan observer didn’t.

Deandre Hopkins caught 10 of 14 passes for 103 yards in Thursday night’s 42-34 win over the Saints. From the beginning of Kyler Murray’s night, the immediate comfort and confidence he had in Nuk was obvious and a presence from the opening kickoff to the final gun. The Cardinals had a solid offensive night in their win at State Farm Stadium with big plays and a heated exchange between Murray and Kliff Kingsbury, and for a team that is upside down at 3-4 on the season, it was a good thing for Arizona fans. Murray’s night was clean from a statistical point of view, having thrown 20 completions on 29 attempts for 204 yards and one touchdown.

With the next five weeks before their bye in week 13, the Cardinals have a fair chance to get back to .500. With a road game to Minnesota up next and the Chargers in Glendale to close week 12, it’s realistic Arizona could head full steam into a home game against a beatable Patriots team, before having to go to Denver, Atlanta, and San Francisco.

The NFC West is a two team race

If it’s fair to say the Seattle Seahawks have overachieved, and the Los Angeles Rams are sliding back, why couldn’t Arizona be a contender for a division with only San Francisco to beat? With Hopkins back, everything looks to be possible for the Cardinals, maybe even a division title. 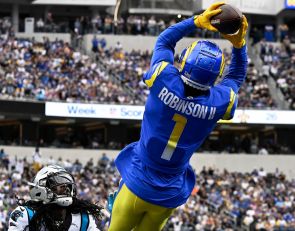