Takeaways From The New York Giants Win Against The Baltimore Ravens

Takeaways From The New York Giants Win Against The Baltimore Ravens

The New York Giants pulled off yet another improbable victory taking down Lamar Jackson and the Baltimore Ravens at home and are now 5-1 after only going 4-13 all last season. The Giants once again used the second half to rally, outscoring the Ravens 17-10 in the second half and rallying from being down by 10 in the fourth quarter to shock the Ravens. With the Giants now looking good at 5-1, here are my three biggest takeaways from the Giants victory.

Everyone was calling the Giants the worst 4-1 team in football coming into this matchup and I agreed. But now look at them now. Beating a team like the Ravens with an electric young quarterback in Lamar Jackson is so impressive, especially how they were able to completely shut him down in the final minutes of the game. Say all you want about the Giants that the fact that they’re getting lucky or that they will crumble down the stretch. But I don’t think so, the Giants never give up and they fight and have a winner as a head coach in Brian Daboll. They’re for real.

Need to stop falling behind early

Yes the Giants won, yes they’re 5-1, but again, they had to rally in the second half of this game, especially in the final minutes in the fourth quarter. Something they have done not just in this game but all six they have played this season. The Giants cannot rely on second half magic all season long and once competition gets tougher in November and December, may not go entirely their way. It is still impressive how they’re able to come from behind and beat good teams like the Titans, Packers and now the Ravens. However, if they want to be in the playoff mix, the Giants have to avoid falling behind early and take advantage of early scoring opportunities.

That Giants defense is special. What Wink Martindale has done to transform this unit is incredible. Just look at what they did to Lamar Jackson in the final minutes of regulation. Julian Love got the Giants first interception of the season at the most important time ever to help set up the game winning score and Giants rookie Kayvon Thibodeaux forced a fumble that was recovered by the Giants proving why he was worth the fifth overall pick. They’re still holes in this defense that needs to be fixed such as stopping the run, giving up huge plays and not getting off the field on third down. But today, the Giants defense stepped up when it mattered and helped propel the Giants to victory. Look out for this Giants defense the rest of the way, especially when they’re at full force! 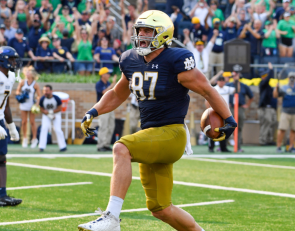