Looking Ahead to Kentucky vs. Tennessee

Looking Ahead to Kentucky vs. Tennessee

Kentucky is coming off a bye week and is sitting at 5-2. The Wildcats are the 19th ranked team in America. Tennessee is coming off a pseudo-bye. They demolished Tennessee-Martin by a score of 65-24. They sit at an undefeated 7-0 and are currently ranked third in the nation. The two rivals face off in Knoxville, Tennessee this Saturday in a massive SEC East matchup.

From a Tennessee perspective, they simply need to win this game if they want to continue their push towards the College Football Playoffs. This is a massive two game stretch for the Volunteers. Kentucky this week before travelling to Athens, Georgia to take on the defending National Champion Georgia Bulldogs. Should Tennessee handle business against Kentucky, the winner of that November 5 game in Athens will have a massive advantage in terms of not only SEC championship aspirations, but National Championship aspirations.

Quarterback Hendon Hooker is firmly in the Heisman Trophy conversation. The fifth-year man has thrown 18 touchdowns and only a single interception. He has also run for three touchdowns and over 300 yards. Hooker is throwing to a group of elite receivers.

Cedric Tillman, who was considered the best receiver on the team and one of the best in the country, has not even played since September 17. Have they missed a beat? Absolutely not. Junior receiver Jalin Hyatt has picked up the slack and more. He has amassed 769 yards and 12 touchdowns on 40 receptions. That is an astonishing 19.2 yards per reception. Bru McCoy also has multiple 100-yard receiving games as well.

Led by star quarterback Will Levis, the Kentucky offense has been a mixed bag so far through seven games. Levis has played well. He looks like the NFL prospect we thought he would be coming into the season. The problem has been the cast surrounding him. The offensive line has struggled to pass protect all season long. The running game has really struggled. Part of that is the suspension to their best offensive player for the first four games.

Will Levis’ postgame interview which was one for the ages. No wonder his teammates love him. pic.twitter.com/zuzt9wULYi

Running back Chris Rodriguez Jr. missed the first four games and the team was just awful at running the ball in his absence. That has since changed. Rodriguez Jr. has 395 yards and three touchdowns in the three games since his return. The three starting receivers have all stepped up at different points in the season. They will need to continue to make plays alongside Levis and Rodriguez Jr. if they want to compete in this game.

Kentucky can score with Tennessee, but they cannot fall behind early. You will not be able to string together enough stops in a row to eliminate a deficit against this Volunteers’ offense. The key for a Kentucky victory is to play from ahead and run the ball. Keep Hendon Hooker and Jalin Hyatt on the sidelines. For Tennessee, it is simple. Get the lead early and force Kentucky to go out of their comfort zone and throw the ball a ton. Make their struggling offensive line pass protect. This has the potential to be a real barn burner on Saturday night in Knoxville. 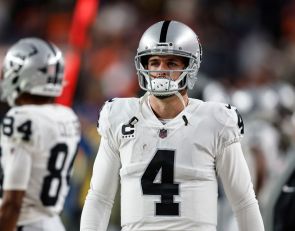 The Tennessee Titans Should Trade for Derek Carr