The New Orleans Saints succumbed to the Tampa Bay Buccaneers in Week Two. In a brutal, titanic, tension-filled affair, the Saints fell short in their home opener. Here are three thoughts from the game.

The Offensive Line is in Trouble

Last Sunday, the Saints offensive line endured a tricky three quarters in Atlanta. A talented Tampa Bay defensive front took advantage of the Saints’ poor pass protection. Jameis Winston was sacked six times, and the Buccaneers consistently hurried him in the pocket. Winston is nursing a significant back injury, and the hits will not have helped ease that pain. Winston is a drop back passer and will not succeed in the face of pressure. Especially with fractures in his back.

Alvin Kamara missed this game, and the Saints could not get a ground game going. An ugly EPA of -0.26 on rushing plays underlines how poor New Orleans’ running attack was. A functioning run game can halt a ferocious pass-rush, but the Saints did not have that. They need Kamara back as soon as possible. Kamara’s rib injury could derail New Orleans’ offensive plan as the season unfolds.

Marshon Lattimore and Mike Evans Are A Sour Mix

Tension, aggression, and drama underpinned this game. Ferocity dominated, and it bubbled over when Mike Evans and Marshon Lattimore sparked a wild melee. Predictably, ejections followed, and the atmosphere hit a fever pitch. These two teams dislike each other, and the return game later this season will feature more spice. It is a burgeoning rivalry, and it will only get spicier following today’s events. 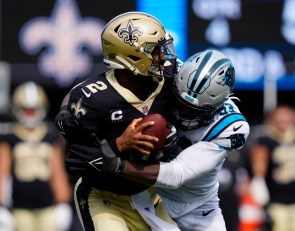 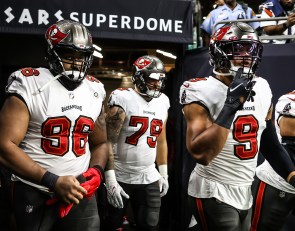