For all of Tony Allen’s strengths as an off-ball defender, he was just as hard to handle as an on-ball defender at the point of attack. Allen found success in defending all-time great scorers like LeBron James, Kobe Bryant, and Kevin Durant. As we’ll see through his on-ball film, many of Allen’s traits in off ball defense translated to his on-ball prowess.

Kobe Bryant vs Tony Allen in the 2010 NBA Finals was a sight to see. Bryant claimed Tony Allen was the toughest defender to match up against because “he was the only one who didn’t ask for help.”

In clip one, Allen is able to prevent a blow by on Bryant’s drive by backpedaling four steps in a coordinated and fluid motion. His right arm is up ready to contest a jumper while his left arm is doing the dirty work by subtly prying into Bryant’s dribble space. This forces Bryant to push-off which allows him more space to fake a spin. Allen isn’t giving up an inch and doesn’t bite for the spin back to the right or the pump fake. Instead, Allen keeps his arms vertical, hands at the ready and knocks the ball out of his hands before Bryant can get a shot off. Allen’s dexterity shined when he dug for the ball in the lane but his extraordinary hands loomed even larger in one on one matchups.

In clip two, Bryant backs down Allen from just inside the free throw line. There’s a two inch height difference here but Allen’s strength allows him to keep up with Bryant. Allen keeps his left hand at Bryant’s hip level while jabbing out his right hand like a boxer trying to land an upper body blow. Bryant lowers his shoulder into Allen’s chest and he’s able to not only absorb the contact but move his right arm up from that jab to a vertical contest. It’s a badly missed shot from Bryant and Allen’s quick upper body movement allowed him to not foul.

LeBron James and Kobe Bryant are two different players and required different strategies for Allen to deploy. With James, Allen had to deal with a hyper athletic force of nature. In the first clip, James forcefully changes directions and rejects the screen. Allen has to plant and backpedal with haste in order to stay with the electric James. Allen stays in his driving path but it’s tough dealing with James’ strength too. Allen is pushed back a bit as James drives to the rim. A quick flip of his hips as James changes directions lets Allen move backwards in lockstep with James. While Allen does feel the force of a Lebron James drive he holds his own enough for the end result to be a turnover.

Allen’s ability to backpedal with speed and control is one of his defining traits as a one on one defender. He gives Bryant the leverage to drive left which was his goal. While Bryant was a great scorer from anywhere, Allen stood a better chance forcing him left than to his dominant right side of the court. As Bryant drives, Allen maintains the lower body and core strength to take his contact while not falling too far out of reach to contest. When Bryant rises for his pull-up jumper, Allen snaps his right arm up to contest while his momentum fails him.

Tony Allen’s deceleration when closing out to his man allowed him to stay with bigger and faster athletes. Here Allen loses Bryant off the ball when he gets stuck navigating the second screener in the stagger action. This causes Allen to have more ground to cover and less time to react once Bryant has the ball. Allen closes the distance quickly but more importantly decelerates as he reaches Bryant near the top of the key. This allows Allen to set his stance and now shadow Kobe as if he had never lost him in the first place. Next we see more textbook on-ball defense from Allen. He moves his feet quickly in a hasty backwards shuffle to cut off Bryant’s drive. Then Bryant tries to shake Allen by pivoting every which way but Allen focuses on the ball and gets a piece of it when Bryant releases it from his hands.

Sometimes Allen wasn’t fast enough when moving downhill to contain drives from Bryant or James. In clip one, Allen shadows Bryant well until he loses his balance. Allen slips momentarily which allows Bryant a window to attack the paint and force help. In the play versus James, Allen stays on top of the screen attempt but can’t handle James’ vicious burst of speed while crossing over from left to right. These kinds of plays are bound to happen considering Allen is dealing with two of the greatest offensive players in NBA history.

Allen’s risky play style when going for steals naturally led to defensive breakdowns if he missed. Against the Lakers, Allen is able to withstand the power of Bryant forcing his way to the basket but sees an opportunity to go for a steal. Even though he fails, it’s no harm no foul since Bryant misses the shot due to some great help from Davis. But missed steal attempts like these often lead to offensive advantages which can easily be capitalized on.

Such was true in clip two against Houston where the Rockets set up a play out of horns. Allen goes under the first screen and bothers Harden enough to send him back a few feet. Unfortunately for Allen he fails to rob Harden of the ball. This leads to help off the corner and a rotation at the rim by Gasol. Harden makes the easy laydown pass for an easy dunk which was initially created off the failed steal attempt by Allen. 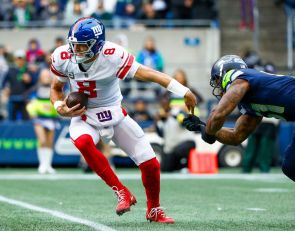