The NHL season begins in Czechia on October 7th with games on back-to-back nights between the San Jose Sharks and Nashville Predators. Before the first official puck drop, it is always helpful to know what each team’s outlook is. This is article four of four that will be predicting the 2022-23 NHL season. Here are the previews for the Atlantic, Metropolitan, and Central.

While the Western Conference is not as strong as the East, there are still multiple quality teams. The Pacific Division is going to be very interesting. Multiple teams made various major moves this offseason, while others did absolutely nothing.

Anaheim Ducks – It was a tough, but promising, year for the Ducks in 2021-22. Anaheim saw its young talent like Trevor Zegras and Troy Terry begin to break out, but still went through a few massive losing streaks that derailed its entire season. The Ducks finished with 76 points and seventh in the Pacific, 21 points out of the second wildcard spot.

The Ducks were fairly busy this offseason signing a few good top-six forwards. Frank Vatrano was signed to a three-year deal and Ryan Strome was signed to a five-year deal. Anaheim also made an under-the-table signing in John Klingberg to a one-year deal. The Ducks also have John Gibson between the pipes who is one of the NHL’s best goaltenders. Anaheim is going to be better than last year, but I don’t know if the Ducks will squeeze into the playoffs.

Calgary Flames – I have already talked about the Flames at length in two recent articles, so I am not going to give a whole synopsis of Calgary’s offseason. The Flames lost players like Mathew Tkachuk and Johnny Gaudreau but acquired both Johnathan Huberdeau and Mackenzie Weegar while signing Nazem Kadri. The Flames went from a Stanley Cup contender to a team that was clearly rebuilding back to a Western Conference power. The new-look Flames are still loaded and will be dangerous come the spring.

Edmonton Oilers – Speaking of scary and dangerous teams, the Oilers went out and signed a goaltender. Jack Campbell signed a five-year, $25 million contract to fill one of the Oilers biggest holes. Edmonton also re-signed Evander Kane to a longer-term extension and brought in Brett Kulak to help its d-core.

Of course, the Oilers also still have both Connor McDavid and Leon Draisaitl. While I think the Oiler took a big step in the right direction, the lack of depth, especially defensively, really concerns me. On the offensive side, I don’t think the bottom six forwards will be able to produce enough to win a Cup. Fortunately for Edmonton, they are still going to be very good.

Los Angeles Kings – The Kings big splash this offseason was the acquisition and extension of Kevin Fiala to a seven-year deal. Los Angeles also brough back Adrian Kempe and signed Brendan Lemieux. LA’s top three lines are looking very dangerous and includes some underrated playmakers. The Kings platoon of Jonathan Quick and Cal Petersen will serve them nicely between the pipes, but the lack of solid depth on the blueline may end up killing the Kings. This is a team that will be fighting for a playoff spot until the bitter end.

San Jose Sharks – The first word that comes to mind when I see the San Jose Sharks is “yikes.” The Sharks have a decent top six and Erik Karlsson. That’s it. San Jose did sign new goaltender Kaapo Kahkonen this offseason but that won’t fix the glaring holes at forward depth and the rest of the defense with Karlsson. There isn’t much to say here. It is going to be a long year in San Jose.

Seattle Kraken – I am so excited for what the Kraken are going to be in a few years. General Manager Ron Francis and his front office have done an amazing job at quickly assessing that the new franchise needed to be build from the ground up. Francis acquired an absurd amount of high draft picks for the next few years (including this past draft) at last season’s deadline.

The team Seattle is going to trot out this season isn’t anything special but can defiantly win some games. The signing of Andre Burakovsky is a nice show for fans. Yanni Gourde, Brandon Tanev, Jordan Eberle, Jared McCann and Ryan Donato should all still be there when all of Seattle’s top-end talent is ready for the pros. BE patient Kraken fans, the time is coming. Shane Wright is on his way.

Vancouver Canucks – People forget that the Canucks had 92 points a year ago. This team doesn’t look too bad on paper, either. The forward group has some household names and now includes the newly signed Ilya Mikheyev. The defensive pairings aren’t bad either. Quinn Hughes, Luke Schenn, Oliver Ekman-Larsson and Tyler Myers are a good top four. Thatcher Demko is also solid in net. If Vancouver can bring in a big goal-scorer and a solid “1b” goaltender at the deadline, then the Canucks could make some noise.

Vegas Golden Knights – The Golden Knights turned from the expansion darlings that captured everyone’s hearts to the hated, bratty child of the NHL. Vegas entered the offseason in cap hell and had to ship Max Pacioretty and Dylan Coghlan to Carolina for future considerations (a.k.a. nothing). The Knights also brought in veteran winger Phil Kessel on a one-year deal.

As for its lineup, the Knights will have its first full year of Jack Eichel. Jonathan Marchessault, Mark Stone, Reilly Smith and William Karlsson are among the offensive returners. Vegas’ defensive core consists of Alec Martinez and Alex Pietrangelo. Throw in Brayden McNabb and Shea Theodore and that is a solid group. The big question mark is at goaltender as Robin Lehner is on IR. Logan Thompson and Laurent Brossoit will have the job to start the season. 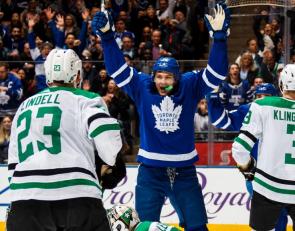 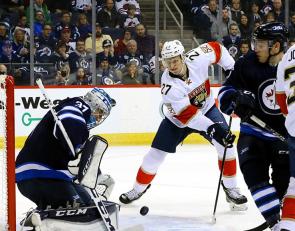