The MLB trade deadline is over and like always, it had some major moves that will shift the power around the league. The majority of teams made at least one move and it’s now time to give each trade a grade for their performance:

The Yankees knocked it out of the park… for the most part. Andrew Benintendi provides above average defense and an offensive aspect that the Yankees lineup currently lacks. Effross and Trevino are great additions to a bullpen that has been scuffling of late. Frankie Montas gives them a bona fide number two behind Gerrit Cole. New York accomplished all of this without giving up their top offensive prospects. They even got someone to take Joey Gallo. On the other hand, why did they deal Jordan Montgomery? That is the only thing keeping it from an “A+++”.

Toronto did well. Pop and Bass provide much needed help to a below average bullpen. Merrifield, assuming he gets vaccinated, provides depth and experience to a top five offense in baseball. The only thing that would’ve made this deadline a firm A for me would’ve been an acquisition of a quality starting pitcher. Regardless, the Blue Jays are a serious threat in the American League.

The Rays have been busy with minor moves and tweaks. These are the moves that will be overlooked by the masses, but they are very “Rays” type moves. Jose Siri is a toolsy, young outfielder that could blossom with Tampa’s development system. We know what the Rays can do with young pitchers. David Peralta is also a great addition to an injury riddled club and should provide above average offense and versatility.

Just going to be honest. I am not a fan of what the Orioles have done. They have opted to take the long-term approach to this rebuild. However, they’re currently in the playoff mix after being the surprise team of the season. I would’ve liked them to keep fan favorites Lopez and Mancini and make a move towards really competing in 2023, 2024, and beyond.

The Red Sox decided to do a bit of buying and selling at this year’s deadline. I am unsure about the direction. They didn’t go too far in either direction and opted not to sell their rentals for top prospects. It seems like they have one foot in and one foot out. Pham and Hosmer could be good fits in Beantown, but they traded fan favorite catcher Christian Vazquez. Did they really get much better? Respect for switching things up, I guess.

The Tigers were supposed to be a much improved team this year with the additions of Javier Baez in the offseason and starting pitcher Eduardo Rodriguez and Austin Meadows. They’re instead facing another disappointing season so we did not expect them to do much at the deadline. They decided to move on from outfielder Robbie Grossman which makes sense since he was basically a rental player. All in all, the Tiger didn’t do too much at the deadline as most expected.

The reason why I gave such a low grade was because of the lack of moves Cleveland made. It was disappointing since they’re only a game back from the Twins. I would have thought they could have made more moves.

I am very disappointed in the lack of moves the White Sox made. Yes, they acquired reliever Jake Diekman but he has not pitched this season so we don’t know what he might bring to the club. I would have loved to see Chicago get a bat like Wilson Contreras but they’re apparently happy with what they have in their lineup.

The Twins added a couple of pretty good pieces. They’re pitching has been their Achilles heel and they fixed that by adding starter Tyler Mahle from the Reds, reliever Michael Fulmer from the Tigers and closer Jorge Lopez from Baltimore. Overall, solid moves made by Minnesota who hold a slim lead in the AL Central.

Getting something in return for Noah Syndergaard was a key for the Angels entering the deadline. Their season hasn’t gone the way they had hoped and they now take a chance on Mickey Moniak. Maybe he can find his footing in a new situation. The team also got off the large contract of Raisel Iglesias, which I consider a win. The Angels also shipped off Brandon Marsh and got catcher Logan O’Hoppe back. He is a capable defender and also has some power as well. All in all, it was a decent deadline for the Halos.

The Mariners made some minor moves around the edges but the blockbuster was going out and getting Luis Castillo from the Reds. He gives them a frontline starter that should help them really compete for a playoff spot to end their drought. He was the best starter on the trade market and now resides in the pacific northwest. Awesome deadline for Seattle.

The Rangers didn’t do too much this deadline despite many thinking they may. They did get a nice young pitcher from Milwaukee for Matt Bush so that’s something. Overall, Texas stood pat and didn’t fall into any panic. They know this rebuild is more than just one season so for that, they get an slightly above average grade here.

The As traded away starter Frankie Montas and got back a decent return for it. I think they could have asked for more from the Yankees but I don’t hate the players they got back. The four players were the Yankees’ No. 5, No. 10, No. 20 and No. 21 prospects so they could have done worse. Oakland is truly in a massive rebuild and the pieces they got in this trade, could pay off in a few seasons.

I love, love, love the aqusition of Trey Mancini for this team. Yuli Gurriel has been struggling so they need a boost on offense and Mancini can be exactly that. They also went out and grabbed catcher Christian Vazquez from Boston. Now he isn’t the best catcher out there but what he provides for a team comes at a good bargain. Overall, this was a nice deadline for Houston and helps them keep up with teams like the Yankees in the American League. 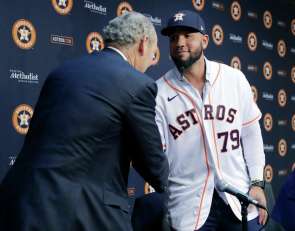