The San Francisco 49ers lost in the NFC Championship Game last season to the Los Angeles Rams. Although the 49ers are a very good team, the Rams are still the favorite to win the division. The 49ers are looking to move on from quarterback Jimmy Garoppolo and start second-year quarterback Trey Lance. The 49ers’ offense is very well rounded from left tackle Trent Williams to tight end George Kittle and wideout/running back Deebo Samuel. The offense isn’t the only good thing about this 49ers team, their defense from the front seven featuring defensive end Nick Bosa and top linebacker Fred Warner to the secondary with their newest acquisition over the offseason in cornerback Charvarius Ward. The 49ers look in top shape to compete against the Rams atop the division.

The Carolina Panthers are in a weakened NFC South outside of the Tampa Bay Buccaneers. The Panthers recently acquired quarterback Baker Mayfield from the Cleveland Browns which makes all the difference for this team. With a wide receiver duo of D.J. Moore and Robbie Anderson along with a returning Christian McCaffrey, this offense could be extremely dangerous. The Panthers’ defense isn’t the best but it certainly isn’t the worst with a solid secondary featuring cornerback Jaycee Horn, Donte Jackson, and a stud safety Jeremy Chinn. This Panthers team won’t win this division, but they can surely cause trouble for the NFC and knock out some crucial wins for a wild card spot.

Some will say the Minnesota Vikings are the favorites to win the NFC North but we all know you can never count out Aaron Rodgers and the Green Bay Packers. With that being said, the Vikings are the underdog in this division and maybe the entire NFC. Kirk Cousins is coming off one of his best years, surrounded by a phenomenal wide receiver in Justin Jefferson and running back Dalvin Cook. This three-headed monster can shake up the NFC and cause some damage. The defense worries me just a tiny bit to compete with the top teams but still has many studs on the other side of the ball. The Vikings will make the playoffs, whether it means making the wild card or even winning the division.

The New York Giants on paper do not have a bad roster but over the past few seasons never seemed to figure it out with consecutive losing seasons in a bad division. This season will be different for the Giants. The Giants are getting running back Saquon Barkley back from injury, all wide receivers are healthy, a revamped offensive line, and a new head coach in Brian Daboll. The Giants also drafted offensive tackle Evan Neal and edge rusher Kayvon Thibodeaux that are instantly going to be impact players. This is quarterback Daniel Jones’ last season on his rookie contract since the Giants declined his fifth-year option, meaning Jones has to earn his next contract. If there is any year for the Giants to compete in the NFC East it would be this season. 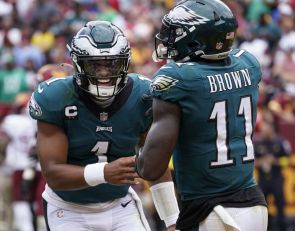