The New Jersey Devils once again were hard at work to try and make major improvements to their squad this off-season. Since making the Stanley Cup Final back in 2012, the Devils have only made the playoffs once since then back in 2018. For the Devils, it has been a slow but now steady rebuild with a couple of draft lottery wins and a major overhaul of their prospect pool. Filled with young talents such as Jack Hughes, Nico Hischier, Jesper Bratt, and Yegor Sharangovich, the Devils have drafted and developed a very solid core. With plenty of other astute prospects in tow as well as new additions from this off-season, the Devils might finally be ready to take that next leap.

In an extremely stacked Metropolitan Division, the Devils need to add some major depth to their lineup if they want to be competitive. The Devils needed to strengthen their defense and went straight to work. Before the draft, the Devils traded away Ty Smith and a 3rd Round draft selection for defenseman John Marino of the Pittsburgh Penguins. John Marino is a tall, mobile defenseman who has a talented offensive skill set. Marino has sneaky good hockey sense and can make some tough plays with his puck management and ability to drive play in transition. He’s a very solid top-four defenseman who can complement the high-end skill of Dougie Hamilton, and aid prospects like Luke Hughes and Simon Nemec  in the future and in the coming years. Ty Smith had a rough sophomore season and didn’t develop the way the Devils anticipated him to. Smith still remains a promising young defenseman and is a highly intelligent puck-mover with legit offensive creativity. He’s a strong skater with underrated speed who can avoid pressure at a high level. But due to his size and ability to read opposing forwards, he has struggled to be a reliable defender.

The Devils got a high-end defenseman to solidify their backend, while Pittsburgh got a more cost-effective project player to save them some cap space. To add to their defense, they also signed Brendan Smith. The 33-year-old signed a two-year contract on July 13th. Smith is a depth two-way defenceman and PK specialist who is mostly a physical presence in his own zone who will stand up for his teammates when needed. He anticipates his hits well and makes sure he does not lose his positioning when doing so. Sometimes he can rush the puck and has some offensive skills to support which is nice for him in a bottom pairing role.

The Devils had become a much better team offensively last season especially 5v5, but struggled on the power play. New Jersey had a lot of cap space to work with and went big game hunting to add to their forward group. At first, they were in the mix for the biggest Free Agent this off-season in Johnny Gaudreau, but inevitably lost out as he signed with the Columbus Blue Jackets. That didn’t deter the Devils from making major moves. To add skilled wingers around Jack Hughes and Nico Hischier, New Jersey signed two-time Stanley Cup Champion Ondrej Palat to a five-year contract July 14th. He had 49 points (18 goals, 31 assists) in 77 regular-season games last season and 21 points (11 goals, 10 assists) in 23 Stanley Cup Playoff games.Palat is a complementary winger who is pretty good at just about everything but is more of a “fill in the blanks” kind of player. Paired alongside Hughes and guaranteed to have a spot on the top power play, Palat will have an incredibly easy time scoring goals. He will definitely be serviceable for the first half of his deal, but at six million for five years for a 31-year-old complementary player, it has the potential to pan out negatively in his later years.

This wasn’t their only major move, as they acquired Erik Haula in a trade that sent forward Pavel Zacha to the Boston Bruins. Haula is a versatile bottom six forward who is a nice addition to the Devils’ center depth. A speedy forward who is also a solid playmaker, he brings speed and positioning that make him valuable as a penalty killer. Finally, The New Jersey Devils re-signed key restricted free agent forward Jesper Bratt to a one-year deal worth $5.45 million Wednesday. Bratt, a former 6th round draft selection, has been one of the most prominent offensive forwards for the Devils in recent years. One of the best scoring wingers at 5v5, is one of the most underrated players in the entire NHL. The 23-year-old Swede posted career highs in goals (26) and points (73) through 76 games last season. He led in points and shared the team lead in goals with Jack Hughes, and through 307 career games, Bratt has 70 goals and 203 points.

In addition to solidifying their offense and defense, the Devils tried to address their most troubling area of their roster by trying to fix their goaltending. Vitek Vanecek was acquired in a trade with the Washington Capitals on July 8th. Vanecek, and then proceeded to sign a three-year contract on July 19th. The Devils have had terrible luck in trying to find and sustain consistent goaltending from their starters and their backups in the past three years. Stemming back from Cory Schneider’s injury when he was the main starter, to the injuries to Corey Crawford and Jonathan Bernier in recent years, nothing has gone right between the pipes for the Devils. Starter Mackenzie Blackwood started his career surprisingly well but took a step back due to injuries and inconsistencies in his play. Now he will have to compete for playing time with Vanecek who will look to take his role. Both are young goalies with the potential to grow into more prominent starters with the right development. If both take major strides the Devils will finally have a goaltending duo to make them competitive.

Finally, the Devils lightly addressed concerns with their coaching staff. May 4th the Devils released Alain Nasreddine and fired Mark Recchi from the coaching staff. Both were brought on to improve special teams, but with no major improvements to either the Devils decided to move on from both. The New Jersey Devils hired Andrew Brunette as an associate coach on Lindy Ruff’s staff. Brunette was the interim coach for the Panthers last season and in his interim role, Brunette led the Panthers to the number one seed in the playoffs and was nominated for the Jack Adams Award for coach of the year. Hiring Brunette strengthens the Devils coaching staff while also adding pressure to Lindy Ruff’s position as head coach. For next season, Ruff most certainly has the hottest seat in the league. If the Devils do not see the results they are looking for as they try to become a more competitive team, it may lead to Brunette taking charge for the Devils bench.

New Jersey, for another off-season is making strides to finally climb out of their rebuild. For years the Devils have struggled and drafted and developed young players to get to this point. Besides Hughes and Hischier, the Devils still have lethal prospects like Alexander Holtz, Dawson Mercer, Luke Hughes, and Simon Nemec that will eventually make their way to the big club. These players along with all the acquisitions the Devils have made this off-season has shown they are serious about taking that next step. It may still take some time for this youn New Jersey squad, but they may be on the up sooner rather than later. And with teams like Pittsburgh and Washington getting older, it may be the Devils’ time to shine. 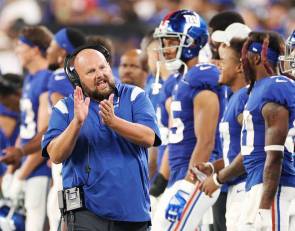