The Nashville Predators, who last were in the Cup Finals in 2017, have still tried to remain a competitive squad in more recent years. With some structural changes to some of their core, they haven’t been able to really culminate a roster to make it out of the first round. Last season, despite being swept by the eventual champion Colorado Avalanche, the Predators had their best record in three seasons. With the resurgence of players like Filip Forsberg, Matt Duchene, and Roman Josi, the Predators still have a rather talented squad. And with their new acquisitions from the off-season, they look to take another run at the Stanley Cup.

The Predators added Kevin Lankinen, Ryan McDonagh, Nino Niederreiter, and Zach Sanford in order to load up for another Cup run. The 33-year-old defenseman Ryan McDonagh was acquired via trade from the Tampa Bay Lightning on July 3rd for defenseman Philippe Myers and forward prospect Grant Mismash. McDonagh won two Stanley Cups with the Lightning and scored 26 points (four goals, 22 assists) in 71 games and five points (last season. McDonagh is known as one of the more savvy defensive defenseman in the league who can also plug-and-play anywhere in a lineup. His talents strengthen the group of top-four defenseman they have in Nashville, possibly serving as part of a shutdown pairing with Mattias Ekholm.

The Predators also signed Nino Niederreiter to a two-year contract on July 21. Niederreiter, who is 29-years-old, posted a 59 percent expected goals rate and 64 percent actual goals rate. Nino adds aggressive forechecking and another goal-scoring forward to the top six forwards alongside Forsberg and Duchene. He also adds a net-front presence on/off the power play while adding a combination of toughness to play against peskiness and finishing touch. At even strength, Niederreiter shined last season, evidenced by his 2.26 points-per-60. Scoring 24 goals and 20 assists through 75 games with the Carolina Hurricanes last season, he’ll be shoe-in for a top six role. To backup Juuse Saros, the Predators also added Kevin Lankinen. Lankinen isn’t anything special, but he was added to relieve a lot of the starting pressure for Saros after carrying a huge load last season. Finally, they added Zach Sanford, who will likely play on the fourth line. He brings a strong physical presence as he played on a team that led the NHL in hits (2,470) last season. Another depth forward to try and strengthen the overall lineup for Nashville.

The Predators don’t really have any glaring issues after this off-season. The only thing that might help them is that they are potentially one forward away from a very impressive top six. They don’t have a lot of cap space to work with, since they only have around two million dollars to work with. But they also have some low cost options that might develop into a nice top six role. Eeli Tolvanen, the team’s first-round pick (No. 30) in the 2017 NHL Draft, alongside prospects Philip Tomasino and Tanner Jeannot will all get a shot at filling that spot. Even if they don’t find someone immediately to take that next step, their current roster has proven they bring a lot to the table. Filip Forsberg, Roman Josi and Matt Duchene had career years and that was enough to bring Nashville into the playoffs. Forsberg resigned to a deal that looks very team-friendly from the outset while Duchene looks like an eight million man again, as he notched 43 goals. Last year Josi showed that he remains one of the league’s premier defensemen, after notching a team and career high 96 points. With all these spectacular pieces, Nashville has surely extended their contention window and look to win their first Stanley Cup soon. 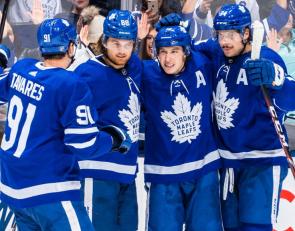