After an amazing run in the playoffs that saw the team upset the Tampa Bay Lightning in 2019, the Columbus Blue Jackets have found themselves in a position to reset the team. The Blue Jackets started the reset process following the mass departure of star players following the 2018-19 season. Artemi Panarin, Sergei Bobrovsky, and Matt Duchene all left the franchise with money to be made in free agency. They were able to bounce back from this quickly though and eliminate the Toronto Maple Leafs during the 2019-20 qualifying series.

Things changed quickly though. The Blue Jackets were unable to make the playoffs past few seasons and traded major personnel and long-term faces of the franchise including Nick Foligno and Seth Jones. During that time, General Manager Jarmo Kekalainen and the organization’s main focus was to add draft picks and young players who can make an impact for the next decade. Through the recent draft they added names such as Cole Sillinger, Kent Johnson, and David Jiříček.

Last season the Jackets finished with a record of 37-38-7 (81 points), for 6th in Metro Division. But with this off-season came a lot of change. Out with the old and in with the new. The Columbus Blue Jackets were ready to put their best foot forward, and went after the best forward in free agency. The Blue Jackets inked left winger Johnny Gaudreau to a seven-year, 9.75 million dollar deal. Gaudreau, who contended for the Art Ross, finished last season with 40 goals and 115 points. Gaudreau has always been an incredibly talented playmaker and elite level talent. His signing in Columbus ended an age long stigma that Columbus could never be an attractive destination for free agents.

“To get a player of this caliber is going to make us instantly better and make players better around him, which is really important in the culture of a hockey team that you have players that lead by example, and he’s done throughout his career and we couldn’t be happier to have him here.” – General Manager Jarmo Kekalainen on Johnny Gaudreau

Free agents refusing to stay in Columbus is a narrative that the Blue Jackets front office has pushed back against in recent years, even if they didn’t always want to acknowledge it. Columbus has built a committed and dedicated fan base that seemingly has grown a ton in recent years. Now with Gaudreau joining the Blue Jackets, the team shows a ton of promise in the near future. And now that the Blue Jackets are in the midst of a reset that has stocked the cupboard with impressive young talent like Patrik Laine, Yegor Chinakov, Cole Sillinger, and Alexandre Texier, there is a ton of promise. As long as they solve their defensive depth out and develop their young studs properly, the Jackets could be back in the playoff hunt in no time. 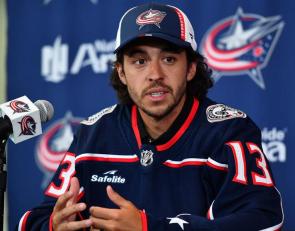