On day three of 32 Teams in 31 Days, we take on the Boston Bruins. The Bruins are easily still on the top four teams in the Atlantic Division, but are getting closer to being on the outside looking in. Just like last season, I can see Boston as another wild card candidate going into this season. But why might that be?

The Bruins have been an incredibly successful team for almost 20 years now. One of the dynasties of the modern era, since the year 2000 the Bruins have only missed the playoffs six times in 22 seasons. And in 2011, they lifted their 6th championship after defeating the Vancouver Canucks in seven games. They almost lifted two more Stanley Cups if they had not lost to Chicago in 2013 and St. Louis in 2019. Keeping together a core of Patrice Bergeron, Brad Marchand, Zdeno Chara, Tuuka Rask, and David Krejčí for years allowed the Bruins to maintain an extremely high level of success. They truly were and have been one of the best teams in the Eastern Conference for an incredibly long time.

New youth like current Boston Stars David Pastrňak and Charlie McAvoy entered the fold, and have provided tremendous support in recent years for the Bruins to maintain their success. Pasta has proven he is a multi-40 goal scorer and one of the best in the league, while McAvoy is easily one of the top five best defenseman in the NHL. But as the years moved on, players got older and rosters changed. Older guys like former captain Chara and Krejčí moved on from the club, whether it was retirement or looking to quench that thirst for another Stanley Cup. Chara played a bit for the Capitals and more recently went back to his original team the Islanders before retiring. Krejčí last year retired from the NHL to play in his home country, Czechia. And now their current core isn’t looking like it’s getting any younger.

Don’t get me wrong, assuming Bergeron gets a contract done with the B’s, the Bruins are still a talented team. Bergeron and Marchand, alongside Pastrňak have formed one of the most dominant lines in hockey. Both are players who can score 70 to 80 points a season and can dominate on both sides of the ice. Not to mention they still have guys like Taylor Hall and David Pastrňák who can generate their own offense and score when they want to.

Yet, Boston hasn’t really added anyone this off-season as they are still trying to navigate signing Patrice Bergeron and David Krejčí, while also trying to give recent acquisition Pavel Zacha a new contract. Boston is starting to enter the twilight of their contention window. All of their key players are either 30 or older (with a few exceptions). Bergeron is 37, Krejčí is 36, Brad Marchand is 34, Taylor Hall and Charlie Coyle are both 30. Besides them McAvoy and Pasta are the only young pieces that have franchise potential. And only McAvoy is currently locked up as he has his eight-year deal in place.

Boston is going to go for one final push with this group before they consider pressing the reset button on the franchise. They still have a great goaltending tandem of Linus Ullmark and Jeremy Swayman who stepped up after Rask suddenly stepped away from the game. They were close to edging out the Carolina Hurricanes last year and still have major potential to push deep into the playoffs.

I believe they still have about two good years to push for it all before they finally decide to retool. If they sign Pastrňak to an extension soon, it will put them in a good place if and or when Bergeron and Marchand either retire or move on from the Bruins. But the competition in the Atlantic Division is rising. The Tampa Bay Lightning have shown no signs of slowing down after making three straight finals appearances and winning two Stanley Cups in the last three years. The Florida Panthers and the Toronto Maple Leafs are one series win away from turning the corner for their franchises. And young teams like the Detroit Red Wings and the Ottawa Senators are slowly but surely on the come up. So the Bruins might be coming to the end of an era.

But, if one thing is for certain, just like all Boston sports teams, the Bruins will find a way to continue to be competitive for as long as possible. Because Boston loves being a city of champions. 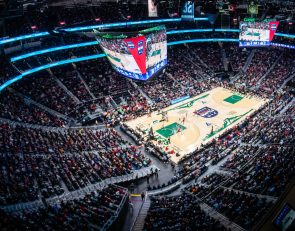