If you don’t know the name Isaiah Land yet, he is someone you need to become aware of before the 2022 college football season. After entering the transfer portal, Land decided to end up staying at Florida A&M for his final year of college. In 2021, he had 43 tackles with 25.5 going for a loss, 19 sacks which led the FCS, and three forced fumbles. What he has shown so far makes him a must-watch player for the Rattlers and a potential top linebacker prospect for the 2023 NFL Draft. Before this season starts here is what Land has shown so far.

-Quick first step off the line

-Can track running backs well with his change-of-direction ability

-Extremely fluid in coverage, Land also has the ability to react quickly in zone coverage and speed to cover receivers in man coverage.

The speed Isaiah Land has off the line is extremely impressive. It leaves offensive linemen hardly any time to react and he keeps his eyes in the backfield to get a read on how the play is breaking down

Won’t be surprised when he gets major 2023 #NFL Draft talk #FMAU pic.twitter.com/w3Y36Qvum2

At 6’4, 215 lbs, Isaiah Land is an ideal linebacker for the NFL. He is a natural athlete that will make an impact every time he is on the field. In addition to playing the linebacker position, Land can line up in a three-point stance or stand up on the line. With how versatile Land is defensive coordinators will be able to scheme up plenty of creative defensive looks. Land’s array of counters in addition to his quick first step gives offensive linemen issues when trying to block him. His 19 sacks last season were just one short of the 20 needed to tie the single-season program record set by Alonzo Johnson. Land wants to break that record and it adds extra motivation for him going into 2022. It will not be surprising to see him do so along with improving even more as he puts his name on multiple NFL teams’ radars. 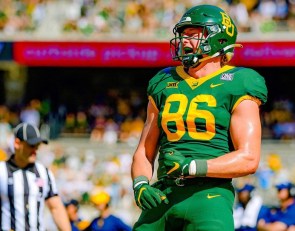