The Baylor Bears’ offense operates heavily off of their outside zone run scheme meaning the receivers don’t see too much production. Even with limited opportunities, tight end Ben Sims has made the most of it and has been productive so far. In 2020 he saw playing time in six games where he had 14 receptions for 164 yards and three touchdowns. In 2021 he built on that and played in 12 games where he finished the season with 31 receptions for 361 yards and six touchdowns. The nine total touchdowns he already has before the 2022 season are the most by any tight end in school history. Heading into 2022 there are things he has shown to make him a good 2023 NFL Draft prospect to keep an eye on, and there are some areas he can improve on over this season to raise his draft stock.

-While he is physical and can overpower defenders at the catch point, when tasked with going against man coverage he doesn’t get much separation

-Angles on blocks can be off at times

At 6’5, 258 lbs, Sims has the idealistic frame for a tight end that teams look for to help in the run game while also being effective as a receiver. With dual-threat Gerry Bohanon as the quarterback last year this also led to Sims not being able to showcase his full potential as a receiver, instead it highlighted his blocking skills. Now going into 2022, it will be Blake Shapen under center who will open up the passing game more. Factor in that Abram Smith, Trestan Ebner, Tyquan Thornton, and Drew Estrada who were all key playmakers on offense are now in the NFL Sims will provide an experienced presence on offense. Sims is a reliable playmaker and that should be on full display in 2022, although the top tight ends for the draft currently are Michael Mayer, Sam LaPorta, Cameron Latu, Darnell Washington, and a few others it would not be shocking to see Sims’ name towards the top by the time the draft comes. 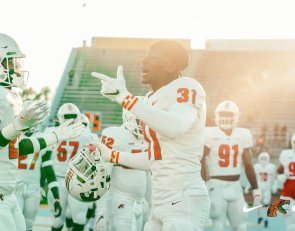