The NBA Draft has concluded itself, so it’s time to go over five of my biggest winners & losers. The choices were certainly tough, as there were many teams that had cases on both sides, but these are the three winners and two losers and ended up settling on. Here we go!

The Pistons continue to string successful drafts together under Troy Weaver. Jaden Ivey was my third ranked player, and Detroit got him at #5. An uber athletic guard with unique offensive versatility. He’ll take Detroit’s transition offense to another level, and his ability to operate in the P&R, fire downhill off screens, and punish slow-footed defenders on an island will take some creation pressure off of Cade Cunningham. Ivey still has some flaws to work out, but in a more refined role as the secondary option next to Cunningham, Ivey’s weaknesses can be hidden and given time to develop while his strengths shine in the sets I mentioned above.

Jalen Duren was my seventh ranked player, and Detroit traded for pick #13 to acquire him. Duren has a polarizing frame and athletic tools, all while being one of the draft’s youngest players. He’s an extremely versatile defender that can serve as a switchable anchor and potentially develop into an all-defensive caliber player. Offensively, Duren is currently limited to screen-setting & play-finishing around the rim, but there is potential for Duren to become more. His passing chops got better as the year went on, and his success as a faceup midrange shooter leaves hope that he could someday develop into a floor spacer, although that would feel like outlier development. Nonetheless, Duren projects to be a game-changing defender with a simple, but effective offensive skill set when put in the right role.

Gabriele Procida is a draft and stash candidate, but I still don’t mind the selection at #36. The 20 year old Italian wing has a really fun prospect profile. Stands at 6’7” with a decent wingspan, lots of shooting versatility, explosive slashing when given an advantage, and some upside as a perimeter defender.

Ismael Kamagate is an athletic rim-runner at #46. His rim protection & mobility makes for a solid defensive projection, but he’s fairly capped in terms of offensive upside.

Look, Keegan Murray isn’t a bad prospect. Given his versatile perimeter defense, feel on the post, off-ball movement, improving three-ball, and knack for making the “right play”, Murray’s got a fine floor. However, at 22 years old with a lack of high-end athleticism and offensive skills, drafting Murray at #4 is drafting him at a ceiling that probably doesn’t exist unless absolutely everything falls into place. As for ranking, I had Murray as a fringe lottery prospect, so I definitely believe they passed on a handful of better prospects in this spot.

The Spurs came into the draft with three first round picks, and they did a great job with each one. Jeremy Sochan was my eighth ranked player. Solid frame, extremely versatile defender, good handle for his size, smart passer, aware cutter, and a skilled inside scorer. The big concern revolves around his three point shot, and although I worry it will always be subpar, all hope isn’t lost. The Spurs could also use some help in the frontcourt, so the Sochan selection also fills a need on this roster.

Malaki Branham was a lottery prospect on my board, and the Spurs got him at #20. Branham is a three level scorer that can also create for others, especially out of the pick & roll. His rise to success at Ohio State last season was an extremely pleasant surprise, and I believe the Spurs have got themselves a really nice young player. His fit alongside Dejounte Murray should be a good one, as both can take pressure off one another as on-ball creators, and Murray can help mask some of Branham’s defensive flaws.

The value doesn’t stop there though, I loved Blake Wesley at #25. A quick & shiftry ball-handler  that can get to the rim, create for others, and despite inconsistent numbers from three and the free throw line, I buy the shot. Oh yeah, he’s an elite competitor and solid player on the defensive end as well. Just 52% at the rim in the halfcourt is very concerning, but with better spacing and a little added strength, I’m hoping  this number will rise, as Wesley has shown many flashes of creativity and ease on the attacking. Wesley is entering an extremely crowded San Antonio backcourt that will draw some short sticks for good players, but I still love this pick from a value perspective. 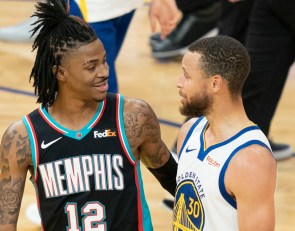