After 18 wins in 25 fights with the promotion, Michael Bisping would finally get his shot at UFC Gold. On 17 days notice, against Luke Rockhold, who had submitted him just two years prior. Bisping only got the fight because Chris Weidman was forced to pull out due to a neck injury and the only other un-booked contender was Jacare Souza, who just suffered a knee injury himself. After a press conference for the ages, Bisping would enter the Octagon a +525 underdog. Rockhold came out extremely nonchalant even smiling at the first few strikes Bisping would throw. Through the early exchanges often referred to as the feeling out process, Bisping would take note the Rockhold was slipping his straight right the same every time he threw it. With about 90 seconds remaining in the first round Rockhold threw a heavy jab that left him out of position, Bisping threw that same straight right, but followed it with a left hook right where he knew Rockhold would be after slipping the first punch. The shot would drop the champion momentarily, only for him to get back to his feet and immediately get put out cold with another left hook. With that Bisping’s legacy and ‘Left Hook Larry’ nickname would be cemented.

On this date in 2015, precision beat power and timing beat speed when @TheNotoriousMMA knocked out Jose Aldo in just 13 seconds 😳

This 13 second performance is the most obvious box check for both of my criteria listed in the beginning of the article. Knocking your opponent out with the first strike you land is the epitome of a flawless performance, and knocking out the greatest featherweight of all time in 13 seconds exceeds anyone’s realistic expectations. McGregor was originally scheduled to fight Aldo at UFC 189, but Aldo was forced to pull out due to a rib injury and the Irish sensation would instead defeat Chad Mendes for the interim featherweight title. After having toured the world with McGregor for the lead up to the UFC 189 card, it was clear the relentless trash talking had gotten under the skin of the Champion. When he finally would come face to face with McGregor in the octagon, he refused to touch gloves with him and uncharacteristically rushed forward at the very start of the fight. Mystic Mac read this attack like a book and slept Aldo with a step back pull-two. The only reason this performance falls so low on the list for me is everything you don’t get to see from a fighter in a 13 second fight. However, McGregor fans are not to worry, his most flawless performance on this list is yet to come.

I was inspired to write this piece after watching this performance last weekend at UFC 273. Flawless would be an insult to describe the masterpiece Volkanovski put on the Korean Zombie. The man who earned his nickname for walking through punches, firing back, and being next to impossible to hurt; would be backed up by every punch Volkanovski would land and never find a spot for his counters. Officially being out-struck 138-48 Significant Strikes after Herb Dean finally waved off the fight as a Standing TKO in the fourth round. A fourth round that literally began with the champion asking Jung if he’s sure he was okay to continue because Volkanovski was beginning to think his opponent had taken too much damage. The only thing keeping this performance from being higher on the list is Volkanovski coming into the fight a -700 favorite.

There’s not much that would warrant literally humping your opponent as a means to celebrate your victory, but if anything does, it’s Israel Adesanya’s title defense against Paulo Costa. Coming into the fight 13-0 having just bettered Yoel Romero off the back of a four fight KO streak to start his UFC career, Costa was looked at as Stylebender’s toughest test to date. He would not be. Out-landing Costa 22-7 in the opening round, Adesanya controlled all the striking exchanges sitting out at range and tearing Paulo’s leg up with inside and outside calf kicks from both stances. Once he had Costa compromised, Adesanya turned up the pressure, engaging in more boxing exchanges in the pocket, and starting to set up kicks to different levels. With about a minute remaining in the second round, the two would meet in the center of the Octagon for an exchange. Costa threw a naked jab that Israel slipped and countered with a check left hook that clipped Costa right on the temple, dropping him. Adesanya followed him to the floor sliding right into full mount and continuing to batter the challenger. Costa gives his back and shells up forcing Jason Herzog to call the fight, and the previously mentioned infamous celebration would begin.

#OnThisDay in 2011: @JonnyBones did THIS to Shogun Rua to become light heavyweight champ! 🏆

On March 19, 2011, Jon Jones at 23 years old would become the youngest UFC Champion ever, and he would make it look easy. Following a submission victory over Ryan Bader at UFC 126, Joe Rogan would announce in Jones’ post fight interview that Rashad Evans had injured his knee and was out of his title fight with Mauricio ‘Shogun’ Rua and Jones would accept the late replacement spot. Just a little over a month after his victory over Ryan Bader, Jones would enter the Octagon across from Rua as the youngest title challenger in the company’s history, and he was doing it on four weeks notice. Jones would dominate Shogun in every aspect of the game. He beat him in the striking, he beat him the clinch, he beat him in the wrestling, he beat him in the grappling. He was the best Mixed Martial Artist we had ever seen. Jones would put on a slow beating for the first two and a half rounds then really pick up the pace in the third, finishing him with a barrage of spear knees and straight punches against the fence in a truly violent removal of the belt. The final stats of the fight would read 102-11 strikes in favor of Jones, one knockdown, three for three takedowns for 7:50 of ground control time. 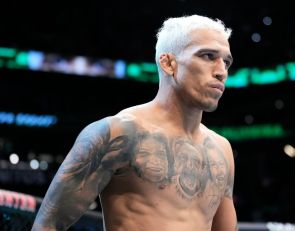 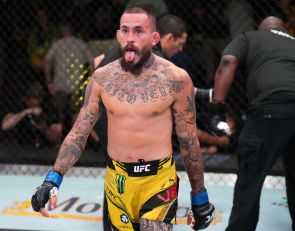