Former USC quarterback Kedon Slovis transferred to Pittsburgh in December after three seasons with the Trojans.

Slovis will be tasked with the responsibility of guiding Pitt back to another ACC Championship Game and a New Year’s Six bowl game in 2022. Slovis will have big shoes to fill coming directly after Kenny Pickett, who finished third in last year’s Heisman Trophy voting. Pickett was one of the greatest quarterbacks in program history and he is a projected first-round pick in the upcoming NFL draft.

The pressure will be on Slovis to help Pitt return to form in the 2022 season. The expectation is that Slovis will be the starter, but he will have to compete against Nick Patti and Davis Beville for the starting job. If Slovis is able to beat out his two new teammates for the starting position, he will have a new set of challenges in front of him.

As a conference, the ACC is going to remain competitive for the 2022 season. Wake Forest, NC State, and Clemson will be the top teams in the conference outside of Pitt. Slovis will not be playing against those three teams, but if the Panthers reach the championship game, he will likely see one of those two teams.

Slovis will be able to work with Jordan Addison, who won the 2021 Biletnikoff Award. This will be a duo to follow in 2022 because Slovis was used to throwing to elite receivers at USC like Drake London and Amon-Ra St. Brown.

In three seasons at USC, Slovis passed for 7,576 yards, 58 touchdowns, and 24 interceptions. His time at USC was cut short when Slovis suffered a lower leg injury against Arizona State in November 2021. Slovis did not return to the field for the remainder of the season, which seemingly played a role in his departure.

The pressure is on Slovis to win the starting job at Pitt and bring them back to the ACC Championship Game on Dec. 3, 2022. If Slovis has a successful season with the Panthers, his draft stock could mirror Pickett’s. 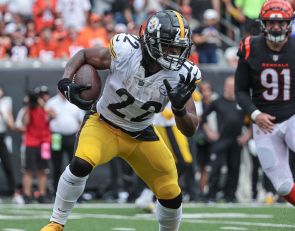