With all the speculation surrounding National Signing Day and NIL deals, it was Texas A&M who came out on top with their recruiting class. In fact, at the end of everything, the Aggies had locked up the number one recruiting class of all time. This class broke the record that was set by Alabama just a season ago and makes for intriguing storylines all next season. They landed Shemar Stewart, a five-star prospect from Florida who ranked in the top ten nationally and he should pair well with Walter Nolen. Stewart is one of the best defensive linemen in this class, sitting at six foot six and 272 pounds. He should be able to instantly step in and contribute to this Aggies team as they look to improve on last season. They also picked up safety Jacoby Mathews out of Louisiana, taking him away from rival LSU.

The team also picked up quarterback Max Johnson and number one tight end Jake Johnson, both of whom decommitted to LSU and decided to join the Aggies program. These two players should help the Aggies win games and were hits to their SEC counterpart. Head coach Jimbo Fisher was heavily rumored to leave A&M after the season but cited the strong incoming class as a reason for him staying in Texas. If this class is any indication, then Fisher made the correct decision to stay and lead the Aggies. In total, Texas A&M got seven five-star commitments in this class which is an incredible accomplishment.

Coach Fisher hopes this is the start of getting this program over the hump in both the Southeastern Conference and nationally as they try to compete for a College Football Playoff berth. Coming off a season where the Aggies had a 8-4 record, the expectations in Aggieland are sky high, especially after this strong recruiting class. Last season, the Aggies had a roster that could have contended for a national title, but they fell short once again. Aggie fans are expecting a National Championship from Fisher and with each year that passes, his seat gets that much hotter.

When looking at the schedule for Texas A&M in 2022, they once again get a few conference rivals coming to College Station including Ole Miss and Florida. However, they will need to travel on the road to take on both Alabama and Auburn, which could be tuning points for their season. Texas A&M has its work cut out for themselves while in a conference with Alabama and reigning champion Georgia, but this excellent recruiting class should help them succeed in 2022 and going forward. The Aggies will once again come into the upcoming season having a good shot at winning the conference and possibly reaching the College Football Playoffs. 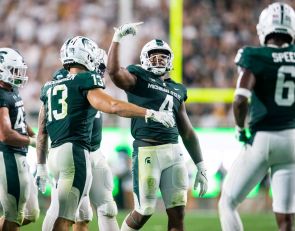 10 Under the Radar College Football Players