Compared to other schools, Miami-Ohio does not grab the attention of most, but Sterling Weatherford is a player that should draw the attention as he is a top safety prospect for the 2022 NFL draft. Coming out of Hamilton Heights High School in Indiana he was only a two-star prospect. He was a two-sport athlete playing football and basketball with his athletic ability. Four schools proposed offers to Weatherford, those schools included Western Illinois, North Dakota, Ball State, and finally Miami-Ohio. With him redshirting in 2017, he didn’t see action on the field until 2018. Over Weatherford’s four years of action on the field, he has a total of 202 tackles with 126 of them being solo. He also has three sacks, four interceptions. Outside of the stats, this is the type of player the team that drafts him will be getting.

For a prototypical safety, the size is roughly 6 feet, 200 pounds. For Weatherford, he comes in at 6’4”, 215 pounds. With his size, it also adds to him having a longer length to break up passes or secure interceptions. His size is also helpful when having to cover bigger wide receivers or even tight ends. The tight end position he actually knows quite well as in high school he played as both a safety and tight end.

📝🏈 #NFL Scouting: Sterling Weatherford (@sweatherford2 )
Another area that makes Weatherford stand out is his size at 6’4” 215 pounds.

His size/length allows him to be able to break up passes with ease when coming across as shown against Central Michigan #RedHawks pic.twitter.com/VGCOHOdaRf

With the RedHawks, Weatherford has been used in single-field, split-field, overhang, and nickel. With Weatherford’s size, they have actually had him used as a sub-package linebacker.

With the body control Weatherford has, it has contributed to great tackling. When it comes to the run game, Weatherford from the film typically keeps his outside arm free while shredding blocks allowing him to execute on his tackle. He doesn’t go for big hits which leads to him being able to wrap up the player consistently while staying balanced. During his 2019 season, he finished second on the team with 98 tackles. He is technical when it comes to his tackling, making sure he measures up his opponent before going in for his tackles.

📝🏈 #NFL Scouting: Sterling Weatherford (@sweatherford2 )
His strength off the bat is his tackling.

He doesn’t rush in to try and make the tackle. Instead waits to see where the player is going, changes his direction, and takes the extra step to not miss his tackle pic.twitter.com/6BudXm3jvk

While he has been effective in pass coverage, Weatherford excels in run defense. What makes him so strong in this area is his patience. While some defensive backs will just lunge at the runner, Weatherford will wait just enough to see what path the runner is going to take and then mirrors their movement to quickly make a precise tackle. His motor has also helped with his closing speed to stop ball carriers in the open field.

As a redshirt senior, Weatherford has now had five years of experience and it shows when he is on the field. He demonstrates the knowledge of how to attack leverage and use gap integrity to disrupt running lanes. He also can read the quarterback’s eyes which allows him to get to where receivers are going to be. This has led to him breaking up 19 passes over his college career. The IQ is also shown in coverage as he knows to stay in the hip pocket to make it difficult for the receiver he is covering to finish their route on time.

While tackling is one of Weatherford’s strengths it is also an area he will need to slightly improve upon. There will be sometimes where he is off on his angle which leads to missed tackles.

There are moments when transitioning from his back peddle to coverage that his hips are stiff in his movement. Also when having to change direction quickly it is not always fluid which allows receivers to gain a slight advantage.

With some things to work on, Weatherford should be a late second-round to early third-round target for teams. His size can be a huge factor in helping boost his draft stock. While he has shown he can play safety, it would not be surprising if a team drafted him to switch him to the linebacker position. He makes for an interesting prospect because teams could do that or have him rotate between safety and linebacker depending on the team they are going up against.

The teams he could go to include the Philadelphia Eagles, Los Angeles Chargers, Minnesota Vikings, Detroit Lions, or New England Patriots (if he switches to linebacker). 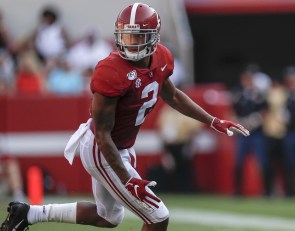 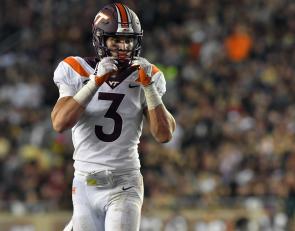