For the 12th time in his coaching career, Saban won at least 12 games in a season. Alabama has won a minimum of 13 games in six of the previous seven seasons. 2021’s Crimson Tide team was viewed as one of the weaker teams in recent history for Saban, but they managed to reach the College Football Playoff Championship Game for the second straight season.

The Crimson Tide made the College Football Playoff in seven of eight years that the Playoff has existed. Saban’s leadership is a major reason why Alabama is a perennial national championship contender

Even though Saban has not coached at Alabama as long as Bryant, he already surpassed him in championships and impact. Saban, 70-years-old, is at his fourth stop as a head coach in college football and his fifth overall. Saban saw success during his time as Michigan State’s head coach, but it wasn’t until he left for LSU in 2000 that he became an elite football coach.

In 2003, Saban claimed his first national championship with LSU. He stayed one more season before he exited the program to coach the Miami Dolphins in the NFL. After two tough seasons in the NFL, Saban went back to college and became Alabama’s head coach.

Saban single-handedly revived a dormant program in 2007. The Crimson Tide immediately became a national powerhouse under Saban and they have not looked back since he came to Tuscaloosa, Ala. Saban has proven time after time that he is a winner unlike any other coach in college football history. With more to accomplish, Saban is already the greatest coach in college football history. 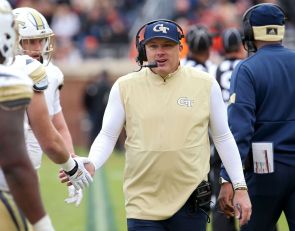