Jake Paul defeated Tyron Woodley via a sixth-round knockout in Tampa, Fla. This was the rematch and Paul finished 2-0 against Woodley.

It was a devastating knockout win for Paul and he proved that he belonged in the ring with a former UFC welterweight champion.

The first two rounds were very technical and it was used as a feeling-out process for each fighter. Paul used the second round to clinch Woodley and keep the fight on the inside, while Woodley was confident with throwing shots in round two. Paul landed a solid overhand right that might have swayed the second round in his favor.

.@jakepaul stuns Woodley in round 2 🥊

Woodley hit Paul with a flurry of punches in the third round and had Paul on his back foot. There was a cut on Paul due to an accidental clash of heads in the third, but Woodley seemed to have an advantage in that round.

In the fourth, Woodley tied up Paul in the clinch and threw Paul to the canvas. Woodley was warned by the referee for his actions but he started to take a lead in the round, as well as the fight. Paul’s face was bloodied in the fourth round.

The fifth round saw back-and-forth punches with both combatants landing a few significant punches. It was up for the taking and finished as a close round.

Paul closed out the fight with a vicious knockout and cruised to his fifth win. Paul (5-0, 4 KOs) will have a lot to look forward to in his coming career. He caught Woodley with his guard down and made Woodley pay for the defensive error.

To put the stoppage in context, Paul was in the middle of a close fight and the scorecards were in question if it would have gone the distance. Paul changed the fight in a split second and scored one of the best knockouts of 2021. Paul will likely see a step up in competition in his next boxing match in 2022.

He scores the KO win in the 6th round to stay unbeaten 💥#PaulWoodley pic.twitter.com/kxr4rG0SNB

Paul made improvements in the span of three months and he will probably face an opponent of a higher caliber in his next outing. Paul is on a mission to prove that he is a legitimate boxer and he is proving the doubters wrong.

He was scheduled to face Tommy Fury on Saturday, but Fury pulled out of the fight earlier this month. There could be a situation where Fury accepts another fight with Paul despite his injuries heading into the first fight against Paul.

Regardless of his future, Paul has earned the respect of many people based on his ferocious finish against Woodley. Paul put a stamp on an impressive 2021 for the 24-year-old boxer. 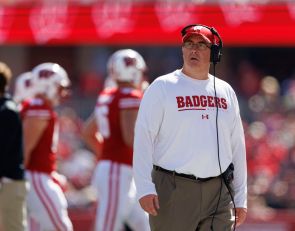