In recent years, the NFL has witnessed a historic run of accelerating offense. Patrick Mahomes, seemingly unstoppable for the first three years of his career, shattered multiple passing records on his way to back to back Super Bowl appearances. Russell Wilson and the Seahawks offense lit the league on fire in the beginning of the 2020 NFL season, and were on pace to be the highest scoring offense in NFL history. However, as always, defenses have adapted as time has passed. This time to coverages that include a large base of two-high safety shells.

In essence, “two-high” safeties is exactly what it sounds like: it features both the strong safety and free safety defending the deep end of the field, with each responsible for a section that runs to each boundary. It’s been a classic staple in the NFL for decades, which leaves the middle of the field open for quarterbacks to operate. The trend, however, has risen rapidly over the past two years.

In 2018, the highest amount of two-high looks faced by any quarterback in the league was 42%. Eight weeks into the 2021 NFL season, only five teams have faced two-high safeties less than 40%. The spike is drastic.

The main purpose of two-high is to prevent explosive plays in the deep third. The coverage itself has intricacies but most if not all leave the middle of the field open. This is key to understanding what’s caused most offenses to struggle.

In the era of explosive plays and gunslingers wanting to test deep corners frequently, NFL quarterbacks have struggled to take what’s given to them. Dating back to last year, Wilson faced a career low slump when facing two-high safeties, throwing 13 interceptions, an all-time career high. Through eight weeks of the 2021 NFL season, Mahomes has already thrown 10 interceptions. Granted, many of these interceptions have been questionable and a result of tipped deflections deep down the field. However, the overall premise remains: defenses are baiting quarterbacks to test deep, and frustrating them by holding both safeties deep for almost half the game.

This isn’t to say offenses have been entirely shut down. Despite the 10 interceptions, Mahomes and the Chiefs still rank as one of the NFL’s top ten offenses according to EPA. However, defenses are capitalizing off ill-timed mistakes and simply frustrating gunslingers. Offensive coordinators are getting restless. Quarterbacks have become trigger happy. Turnovers have occurred at extremely high rates.

While offenses around the league continue to struggle to move the ball consistently, the answer remains crystal clear to defeating two-highs: running the ball. Over and over again. As with all things in life, two high safeties isn’t a perfect scheme. Due to the nature of defensive backs lined up well outside the box, offenses often have a light defensive body count in the box to go against. This opens up numerous lanes for running backs. Any competent quarterback in the NFL knows this is how to run a defense out of two deep safeties. In theory it’s an incredibly simple strategy to defeat this style of defense, yet remains hard to execute and even harder to stick to when things go south.

Perhaps the most intriguing battle of two-high vs a high powered offense came in last season’s divisional round matchup between the Green Bay Packers and Los Angeles Rams. Entering the game, the Rams ranked as the NFL’s number one overall defense, and operated in two-high shells at a record breaking rate as then defensive coordinator Brandon Staley anatomically picked apart top offenses in the league. Part of what made Los Angeles so special was their ability to play light boxes due to the pure talent they had on the interior defensive line. Aaron Donald and Sebastian Joseph provided a ton of flexibility, and stuffed interior run plays that would frankly work against 31 other NFL teams. Yet, even against the star studded Rams, Matt Lafluer and the Packers put up a light 32 points. How, you might ask? They ran the ball.

The Packers running backs combined for 192 yards as lead back Aaron Jones averaged well over seven yards per carry. It was the highest total the Rams defense allowed all season. Matt Lafluer stayed patient and simply took what the defense gave them. And when the offense stalled out on back to back drives in the second quarter, the Packers didn’t panic. They continued to run the ball and did so with great success. This eventually forced Staley to drop a safety in the box and Lafluer responded by returning to the staples of what the Packers passing game relied on all season: three by one wide receiver formations. It was too much for the Rams to be consistently adapting to, and eventually they gave out.

To beat two-high, offenses have to come to terms with being boring. They have to methodically move the ball down the field and open up the passing game by first running the ball and forcing defenses to increase the box count. Else, coaches such as Staley, Vic Fangio, and Sean Desai will continue to build their defense to capitalize on the money-hungry tendencies of NFL offenses. Only time will tell how long the trend will continue to support them.

Coming back to current times, Patrick Mahomes is being forced to push the ball down the field and create explosive plays due to the Chiefs inability to run the ball. The same can be said about Russell Wilson and the Seahawks 2020 offense. As the Seahawks offensive line sustained injuries and Chris Carson slowly deteriorated, a greater amount of stress was put on Wilson to make something out of nothing.

Two-high safeties is not perfect coverage, in fact it’s far from that. However at the moment it remains the style of defense that gives offenses the most struggles and continuously tests their patience. Similar to previous cover-3, single high safety defenses, I expect offensive coordinators to catch on sooner rather than later. In that case, there will likely be another defense that floats around in a couple more years and tests offenses once again. The cycle will always continue, and that’s what makes the NFL so entertaining. 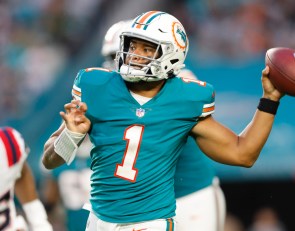