After 17 games played, the Rangers now sit at 10-4-3, good for 23 points and third in the Metropolitan Division. This was a tough stretch of games against a set of teams that have all shown the ability to win close games. Montreal has had a down year, I know, and of the four opponents they proved the least ready for the Rangers’ style of play.

There is a lot to talk about, both on the ice and off. The biggest news of the week that isn’t directly Rangers related is a postponement of the slated Saturday matchup between the Senators and the Rangers. Ottawa is in COVID protocol and had to postpone a minimum of three games. The other teams affected are the Nashville Predators and the New Jersey Devils.

This postponement actually gave me an altered spread of games to cover so I lumped the Maple Leafs matchup into this one, but you don’t care about that, let’s get into the games:

This was a matchup between two Metropolitan teams, both of which have surpassed expectations so far in this young season. The Rangers fell down twice in this game, first 1-0 then 2-1, but both times they managed to fight back to tie the game and eventually secured a lead that they would not relinquish.

The Rangers got two goals each from Artemi Panarin and Chris Kreider, one from Jacob Trouba, and survived an injury scare to Igor Shesterkin on the way to victory.

Jakub Voracek opened the scoring with a powerplay goal from the slot, scoring over the shoulder of Shesterkin nine minutes into the first period. Panarin tied the game before the first intermission by finishing a passing play from Ryan Strome and Adam Fox, depositing the puck into a wide-open net before waving at the boo birds in the crowd. Eric Robinson scored the Blue Jackets’ second of the night with a beautiful shot, beating Shesterkin’s glove from the far side.

The Rangers responded quickly, scoring three goals within two minutes of Robinson’s. The tying effort came on a Kreider redirection of a Trouba pass at the front of the net. Panarin notched his second of the game to establish the lead, collecting a pass from Ryan Strome high in the slot and exhibiting supreme patience for his shooting angle to open up.

Jacob Trouba completed the two-minute scoring rush with a tap in up close to the net, finishing a play from behind the cage by Julien Gauthier and Barclay Goodrow.

Chris Kreider would extend the lead to 5-2 about a minute into the third period, again a net-front finish off of a pass from Mika Zibanejad while on the powerplay.

Shesterkin would be injured on the last goal of the game, colliding with Alexandre Texier while the puck found its way into the net. In Texier’s defense, Shesterkin was incredibly high in his crease and the play was exacerbated by Rangers defenseman Patrik Nemeth. All reports following the game indicated Shesterkin will be ok.

Alexandar Georgiev finished the final 6:45 of the game, stopping the only two shots he faced. Prior to his exit, Shesterkin had made 31 saves on 34 shots. The Rangers generated an impressive 41 shots against the Columbus goaltender, Elvis Merzlikins, 36 of which he stopped. The Rangers went 1 for 2 on the powerplay and allowed one goal on three penalty kills.

So that's 🔟 for Kreider 👀 pic.twitter.com/RnqzS84GBy

You just can't let Panarin get this look. Stromer with the saucer 🛸 pic.twitter.com/GQnMlf7MNf

Kreider's 7th ppg of the season. We're not even halfway through November, btw pic.twitter.com/Ue74MrgMmE

This was an emotionally charged victory for the Rangers. It featured a goaltending injury for one team, a season-ending injury for the other team, and concluded with a seven-round shootout. Kaapo Kakko broke his scoring slump with two points and a shootout goal, Alexandar Georgiev stood tall in net in place of Shesterkin, and the Rangers came out on top in the first meeting of the Hudson River Rivalry of the regular season.

Kakko’s goal was his first of the season and during his beautiful move to secure the goal his elbow collided with the head of the starting New Jersey goaltender, Mackenzie Blackwood, who would be removed due to concussion protocol. The play was reviewed for goaltender interference, the goal stood, and Kakko was not penalized.

Blackwood had 30 saves on 33 shots before his exit. Jonathon Bernier played 16 minutes as his replacement and stopped all eight shots he faced. Georgiev had 24 saves on 27 shots for the Rangers.

The Rangers also had a player exit in this game. Sammy Blais, the right winger that the team received as part of the Pavel Buchnevich deal, left the game with a knee injury after going into the boards tangled with Devils defenseman P.K. Subban. This is the same type of play that got Ryan Reaves hurt in the preseason and Subban has already been fined twice this year for trips against Calgary and Anaheim.

Now, Subban was not penalized in the game and the league neglected to dole out any discipline, but looking at this objectively I am no longer willing to give Subban the benefit of the doubt. A closer look at his play over the years reveals that this type tripping, much akin to what is referred to as “slew footing” is clearly a major part of Subban’s game. If the contact really is incidental in every occurrence, then the lack of an adjustment to his game is negligence at best and malicious at its worse. Blais will sit out the remainder of the season with a torn ACL.

These two teams don’t resume their rivalry until March, probably safe to assume there will still be some bad blood hanging over at that point.

Laffy, from Trouba and Kakko.

Love to see it. pic.twitter.com/EJwzzO1Bme

Here's what it took to put CK20 at center stage for Round 7. 🤝 pic.twitter.com/iWfXiHzors

This game was a battle of goaltenders and the Rangers rode Shesterkin to victory. He made 31 saves on 33 shots against, while Cayden Primeau stopped 31 of 34. The Rangers scored the only goal of the first period.

The team had a solid offensive effort that allowed Artemi Panarin to generate a shot. He collected his own rebound and centered the puck to Kaapo Kakko, who deposited it in the back of the net for his second goal in as many games. Christian Dvorak tied the game two minutes into the second period by sneaking a puck inside the pipe from behind the net.

Chris Kreider scored to reestablish the lead, finishing a saucy no-look pass from Mika Zibanejad. Julien Gauthier scored the third and final goal from the Rangers off a superb offensive zone effort two minutes into the third period. He forced a turnover and finished the play himself while falling down. The Canadiens would respond 22 seconds later with a goal of their own, though the tally by Josh Anderson would be the closest they got.

Both teams went scoreless on the powerplay, the Rangers 0/3, Canadiens 0/2. For the fight enthusiasts, for the first time in his New York Rangers career, Ryan Reaves has dropped the gloves. He deserves an honorable mention for his second period scrap with Montreal rookie Michael Pezzetta. Pezzetta tries to make a name for himself in just his eighth NHL game but Reaves dominated. That highlight is shared as well.

The Kid Is BACK! pic.twitter.com/1e2SOwwJ1I

Michael Pezzetta thought he had a chance fighting Ryan Reavespic.twitter.com/LvnSO60SVn

This was frustrating loss for the New York Rangers. Not because they played poorly, more so frustrating that this game was in reach but the win couldn’t be grabbed. Both teams played with a strong style that limited entrances to the offensive zone, with the defenses standing the puck up at the blue line. This created a low-scoring affair that seemed like a slog for both teams, and frustration showed on both benches.

Morgan Rielly scored both goals for the Maple Leafs, one in the first and another in the second. His first goal came almost four minutes into the game, firing a shot from near the blueline that found its way through traffic into the back of the net. Rielly scored his second of the game on a powerplay around halfway through the second period. He walked the puck in, displayed some handy stickwork, and fired a shot past Igor Shesterkin.

The Rangers got their only goal of the game with just over three minutes remaining in the third period. It was Dryden Hunt’s first goal as a New York Ranger and it was a beauty. An absolute blast off of a rebound that was sent directly top shelf.

Shesterkin made 28 saves on 30 shots while the Toronto netminder, Jack Campbell, stopped 27 of 28. The ugliest stat of the night was the Rangers faceoff percentage of only 20 percent won. They were also 0 for 1 on the powerplay and allowed a goal on their only penalty kill. This loss snapped a four-game win streak for the Rangers.

I have said multiple times already this season that fan sentiments need to be tempered for this team. New coach, weird year last year, young team, all reasons to be patient with a hockey team. Then the Rangers started outperforming everybody’s expectations and a fall from grace was predicted. I will admit that I even had questions about whether or not they could sustain this level of play.

They finished a road trip last week and the fans were down. Then they started a four-game win streak with an impressive win against the Florida Panthers and snowballed that momentum into three wins this week. The Toronto game aside, this team has shown marked improvement and I’m starting to believe this can be sustainable.

They’re finally generating a consistent number of shots, including at 5v5. Yes, their goaltender is probably still facing too many shots, but at least they’re generating as many as they give up.

Fans have been concerned that the offensive output from Chris Kreider is unsustainable; his 12 goals, 7 on the powerplay, are both good for second in the league. He has been a streaky player in the past, there’s no denying that, but there is a chance that this is a legitimate adjustment to his game. He’s playing north-south hockey, he’s got a nose for the net, and his speed is still such a valuable asset. His goals are also coming off the connection with supreme playmakers like Zibanejad who continue to find him open near the net. Until a team sticks a shadow on him for a whole game these goals will continue flowing.

Due to the postponement, there won’t be another Blueshirts game until Sunday at home against Buffalo. There will be four total games played between now and my next edition of Rangers Reactions. Buffalo at home, away at the Islanders and the Bruins, and then another Sunday game at home also against the Islanders. There is a realistic chance that the Rangers win all four of those games. Until next time, Rangers fans! 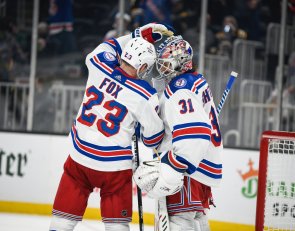 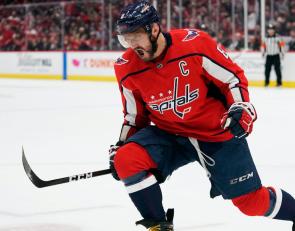 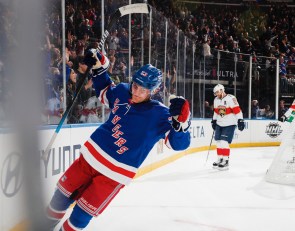