Money to Nothing: The Fall of Graham Mertz

Money to Nothing: The Fall of Graham Mertz

The University of Wisconsin-Madison is known for a few things: its stellar reputation as an academic institution, its heavy party scene, and its unique campus are all notable aspects, among others. But what it might be known for the most is its football team: a dynamic powerhouse that has fostered talent in recent years such as the Watt brothers and Russell Wilson.

Wisconsin’s reputation as a football powerhouse is now in jeopardy—and many fans and analysts alike are pointing to one man as the source of its struggles.

A native of Overland Park, Kansas, Graham Mertz was rated as the best pocket passer in the class of 2019 and the 21st highest rated recruit overall. In his senior year, Mertz completed 61.1% of his passes for 3,886 yards and 51 touchdowns; the latter of which is a Kansas-state record. He was invited to the All-American Bowl, where he both won Most Valuable Player and set a bowl game record with five touchdown passes. After committing to the University of Wisconsin-Madison as a four-star recruit, both analysts and fans alike were more than excited for his seemingly sky-high potential.

Mertz’s start at Wisconsin was nothing short of spectacular—in his first game against Illinois, he began the contest with 17 straight completed passes, which tied a Wisconsin record, and his final completion percentage of 95.2% broke the school’s single-game record. He also tied Wisconsin’s passing touchdown record in the 45-7 victory with five. The hype train surrounding Mertz seemed to be chugging at full-speed.

And then, less than 24 hours after he relished in the glory of his first victory at Madison’s historic Camp Randall Stadium, Graham Mertz tested positive for COVID-19. His positive test result would be the first of a team-wide COVID outbreak, forcing the cancellation of the Badgers’ next two games against Nebraska and Purdue, respectively.

Recovering just in time for the Badgers’ heavily anticipated matchup against the Michigan Wolverines, Mertz would lead the team to a 49-11 victory, posting a more muted stat line of 127 yards and two passing touchdowns. The Badgers would lose their next three games to Northwestern, Indiana, and Iowa, and Mertz would throw four interceptions and just one touchdown during this losing stretch.

The highlight of Graham Mertz’s redshirt freshman season was his 42-28 victory over Wake Forest in the Duke’s Mayo Bowl, throwing for 130 yards and a touchdown in the affair. During the postgame celebration, Mertz hoisted up the bowl trophy in triumph—only for its glass football top to fall off and shatter. While initially seen as a comedic error, the shattering of the glass can be seen as an omen for the future yet to come.

Graham Mertz’s start to his sophomore season has been nothing short of dismal. In the opening day contest against Penn State, Mertz would toss two costly interceptions; one of which was on the goal line during the closing minutes of the fourth quarter. The Badgers would lose the game 10-16; a game within which Mertz boasted a dismal 59.5 completion percentage. His next game against Eastern Michigan, originally considered an easy win for Wisconsin, was only slightly better: although he threw for 141 yards, he still remained without a passing touchdown on the year.

With a heavily anticipated contest against Notre Dame at Soldier Field looming in the distance, Wisconsin fans were anticipating—and praying—that their former four-star recruit would finally perform to his potential.

Instead, Badgers fans witnessed their worst nightmare come to life.

Wisconsin led Notre Dame at the opening of the fourth quarter due to a 27-yard field goal by senior kicker Collin Larsh. The Fighting Irish would answer in the following kickoff, with Chris Tyree returning the ball 96 yards to the house. The game was still within reach for the Badgers—and then, with 12:14 left in the fourth quarter, Graham Mertz fumbled the football on Wisconsin’s 46 yard line.

The turnover would prove to be costly—six plays later, Notre Dame would score a touchdown via a 16 yard pass to Kevin Austin Jr.. In a two-touchdown deficit, Wisconsin had 9:34 left on the clock to answer. This was Mertz’s time to finally shine—alas, once again, he would turnover the ball, throwing an interception straight into the hands of Notre Dame cornerback Cam Hart. A field goal would follow, leaving the Badgers in a 27-13 deficit with 3:15 left in the game. Wisconsin fans were begging—pleading, even—for a miracle to happen.

What instead occurred was Graham Mertz throwing a pick-six with 2:13 left on the clock. Badgers fans wondered if the situation could get any worse—only for their quarterback to once again throw another pick-six with 1:01 left in the game. Wisconsin had lost one of their most anticipated games of the season in humiliating fashion and on national television.

The man once called “Money Mertz”, whose high school career set records in his home football-heavy state of Kansas, has been reduced to a shadow of his former potential. On the eve of Wisconsin’s fourth game of the season against conference rival Michigan, many fans have lost all hope—and Graham Mertz has lost all hype. 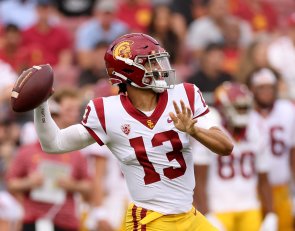