Unlike any of the four major sports, baseball is the most difficult to have a complete rebuild of an organization in just one offseason.

We’ve seen it attempted before, most notably in 2021 with the New York Mets and San Diego Padres both failing to rebuild in just one short offseason. But, at the same time, eyes can look at the San Francisco Giants and Boston Red Sox in 2021; after missing an expanded playoff in 2020, both teams bounced back and shattered their expected win totals.

With the 2021-22 offseason beginning, TWSN will go through each team in MLB in an attempt to rebuild each franchise leading them to a successful 2022 season.

In this series, suggestions for signing specific free agents may multiply, as each franchise could have similar plans. Each team’s definition of a “successful 2022 season” may vary as well.

We start in the American League East with the New York Yankees. The expectations for the 2022 Yankees are clear: they must return to the Fall Classic for the first time since 2009.

For two-thirds of the season, the Yankees looked like a lost cause. Dealing with injuries, inconsistent lineup construction and pitching problems, it appeared that the team may miss the playoffs for the first time since 2015.

They turned it on in September and secured the last Wild Card spot in the American League. After a wild card loss in Boston, fans called for a complete tear down from Brian Cashman to Aaron Boone. Most of the coaching staff was let go, but not Boone. Boone signed a three-year contract to remain with the team.

Now the issue for the Yankees is the construction of their team. The pitching is not strong enough to lead a contender, the infield has question marks and the lineup isn’t as deep as it once was.

The groundwork is there, but how can Cashman lead the Yankees to win a pennant in 2022?

Players Under Contract: Who Stays & Who Goes?

The Yankees have the majority of their roster returning in 2022. The Yankees only have three notable impending free agents: Brett Gardner, Corey Kluber and Anthony Rizzo.

Everyone else returns for the Yankees, including multiple monster contracts they are already committed to. The Yankees managed to stay just over one million under the luxury tax in 2021, but it will be a difficult task to do the same in 2022.

The Bronx Bombers are already $18.4 million over the luxury tax for the 2022 season and free agency hasn’t even begun yet.

The projected arbitration numbers from MLBTradeRumors project the Yankees to give multiple hefty deals, including $17.1M to Aaron Judge, $10.2M to Joey Gallo, $6.2M to Gio Urshela and $5.9M to Gleyber Torres among multiple other large deals.

Even with the Yankees well over the luxury tax, priority number one should be to secure Aaron Judge for a long-term deal. The 2022 season is the last on Judge’s deal, meaning it’s time to secure the 6-foot-7 monster. If the Yankees don’t secure Judge this offseason, he would hit the open market after the season and attract numerous teams that would only inflate an already expensive price for Hal Steinbrenner.

The lineup didn’t work for the Yankees in 2021, and it may be time to move on from a few of their pieces.

One of them being Luke Voit. It appears Cashman and the Yankees front office wants to retain Rizzo to play first base for them. Sticking with Rizzo makes sense, but if the Yankees are going to trade Voit, they can’t make the same mistake they made with Miguel Andujar and Clint Frazier; they must trade him before his value is too low.

Voit had a .764 OPS in 68 games in 2021, just one year removed from a Top 10 AL MVP finish in the abbreviated 2020 season. Moving Voit to a team like Detroit, Colorado, Washington, Cleveland, Milwaukee or San Francisco would make sense.

The question many ask: is it finally time to trade Gary Sanchez? It doesn’t appear to be the right time. Looking at the potential free agent catchers, there are zero options under the age of 33 that would make strong candidates. Two 31-year-olds, Christian Vazquez and Mike Zunino will get their club options picked up and Buster Posey isn’t signing anywhere outside of the Bay Area, meaning there are no strong options for an everyday catcher. Tucker Barnhart may be available, depending on if Cincinnati picks up his $7.5M club option. A match in the Bronx may fit if his club option falls through, but Barnhardt doesn’t resemble an everyday starter.

Who Should The Yankees Target in Free Agency?

It’s obvious after one full season at shortstop that Torres is not the answer. Torres had only a 94 wRC+ with a .697 OPS at the plate while posting a -10 DRS at shortstop. It wasn’t the season the Yankees wanted from the 24-year-old.

Reaching for the stars and signing a shortstop this offseason makes sense, especially with this shortstop class being one of the best there have ever been. But, with Stanton and Cole already signed to contracts over $324 million and Judge possibly not being that far behind, going all in for a shortstop would not be the right solution.

A match made in heaven for the Yankees would be to sign Trevor Story to a one-year, $21M contract.

It makes absolute perfect sense for both sides. For the Yankees, you’re not throwing an absurd amount of money at a shortstop when you already have other players you’ve committed (and should be committing) to, while also not committing to a player that would provide as a blockade to two of the Yankees top three prospects, Oswald Peraza and Anthony Volpe, both shortstops.

For Story, it makes even more sense. Take for example Marcus Semien. Semien finished third in MVP voting in 2019, but struggled mightily in 2020. He signed a one-year, $18M contract with the Toronto Blue Jays, proved himself hitting 45 home runs with a .873 OPS, and will now hit the market as one of the most sought-out players and will receive one of the largest contracts out of any free agent this upcoming season.

Story should do the same, and it should be in the Bronx.

Semien performed so well in 2021, with the main reason being that he was incredibly protected in one of the best lineups in baseball. If Story signs in the Big Apple in 2022, he would be protected in a lineup around his former teammate and two-time batting champion D.J. LeMahieu, Giancarlo Stanton and Aaron Judge. You’d be hard pressed to find better protection than that, at least on paper

The Yankees must also acquire pitching this offseason. For Brian Cashman, it always makes sense to look at pitchers who don’t surrender the long ball too often and ones who excel in their ground ball percentage.

With already having an ace in Gerrit Cole and Luis Severino returning from injury (along with Jordan Montgomery, Jameston Tallion, Domingo German and Nestor Cortes already under contract for next season), the Yankees mostly only need depth starters.

Small free agent signings that would make sense include Anthony DeSclafani and Wade Miley. DeSclafani would make perfect sense, with his ground ball rate finishing in the top 20 while also having a WHIFF% of 24%.

Trading for Sean Manaea would also fit the Yankees, especially with Oakland reportedly wanting to trade him, as he produced a 42.7% ground ball rate and 27.1% WHIFF%; Manaea is in the last year of his contract, set to make $10.2M in 2022.

The Yankees had a 3.56 ERA from their relievers in 2021; they also were in the top half of blown saves in the league at 26. Signing depth pieces such as Archie Bradley and Jeurys Familia makes sense for the team. There is a high expectation that he returns to Queens, but if Aaron Loup doesn’t sign with the Mets, shifting boroughs to the Bronx makes sense.

Next MLB One Year Rebuild Team: The Boston Red Sox. 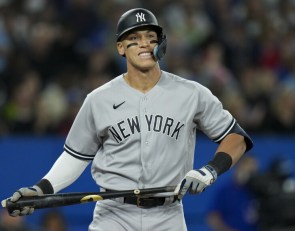 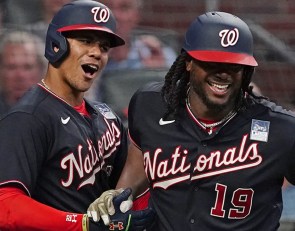 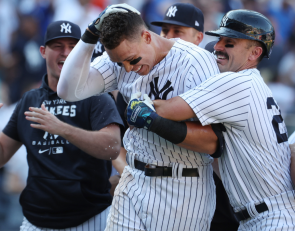 The Yankees Should Acquire a Starting Pitcher at the Trade Deadline