Luke Albright Ready To Rocket Up Draft Boards After Dominant 2020

Luke Albright Ready To Rocket Up Draft Boards After Dominant 2020

After posting a 2.81 ERA in 51.1 innings in his true-freshman season in 2019, Kent State’s RHP Luke Albright earned himself the Friday night starting role entering the 2020 season.

The lanky Albright put on muscle, as he got stronger from his first year to second. Through his first four starts, Albright posted an impressive 1.90 ERA, striking out 22 batters in 23.2 innings. His final start was a 6.2 inning outing, only allowing one run against then 8-5 Liberty. Just a few days later, the NCAA Baseball season was canceled due to COVID-19. Now, barely into his sophomore campaign, Albright was left without a season.

The 6-foot-4, 215 pound starting pitcher was moving up on MLB Draft boards. With collegiate baseball being put on pause, draft boards became stagnant. But, Albright became ambitious on finding a way to be seen.

With the pandemic striking, Albright had to find a way to keep his arm in shape.

At home in Fishers, Indiana, one of Albright’s friends became his personal throwing partner; the duo threw weekly as they tried to mirror a Friday night start. While many college pitchers weren’t able to throw, Albright kept in shape until he was able to take the mound again.

It was at the Northwoods League where Albright found his summer home. Not only did the summer league help Albright get his pitching arm work, but it helped him grow as a player.

“The only cool part about [summer league] is that not only am I doing this, but there’s other guys doing this. So when you all get together, it’s like you’re all brothers from the start.” Albright said. “I learned a lot from [the other players].”

Not only was Albright’s experiences huge for him as an individual, but his performance on the mound was exceptional. Between The Northwoods League, where he struck out 43 batters in 29.2 innings, and the College Summer League at Grand Park, where he struck out 13 in six innings, Albright showcased his best breaking ball pitch: his curveball.

When Albright started his collegiate career at Kent State, he didn’t have a secondary pitch. He started to build his repertoire from his first day on campus. The more he threw it, the better he felt throwing it. Over time as he learned he was able to throw the pitch harder, he found the more spin the pitch was getting. But, he continues to develop his additional two other pitches, most specifically his changeup, to help him get deep into games.

“When I get the ball, I want to keep it until the game is over. That’s my goal, and if I’m doing that, I’m helping my team win,” Albright said. “The ability to take two pitches and then expand them to three to get you through a lineup gets them to see a new look.”

With Albright expanding the pitches in his repertoire, he’ll be able to get deeper into games for the Golden Flashes. Not only will it help his team in the MAC, but it will help Albright’s draft stock.

According to MLB Pipeline, Albright is the 85th best prospect in the 2021 Draft. D1Baseball.com has him as their 77th best collegiate prospect in the upcoming draft and has labeled him the third best pitching prospect in his conference.

Pre-season, Albright’s name is already one in the conversation for MAC Pitcher of the Year. A dominant 2021 season will not only help him achieve that goal, but will move him up on draft boards this upcoming July. 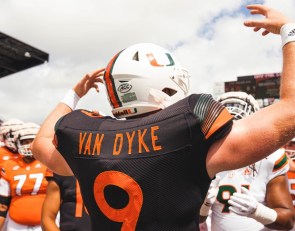