The NBA Draft is right around the corner and I could not be more excited about it. So many rumors flying around and with a draft with so many uncertainties as this one, there’s going to be a lot of surprises on draft day.

Now, predicting surprises is extremely hard. This draft can go in so many different directions but I’ll be trying to predict how I think it’s going to go and what players each team would like to select.

The Charlotte Hornets have their eyes set on a big man to replace former top 5 pick Cody Zeller. They’re extremely interested in selecting James Wiseman and while I personally don’t think he’s a great fit, they’re sold on him. Minnesota doesn’t need the first overall pick and has been looking to trade down. Trading to #3 and retaining an insanely valuable asset in Charlotte’s FRP next year is the smartest move for them.

Right now, the Hornets are one of those teams that should just go with the best pick available. Guys like Devonte’ Graham and PJ Washington are solid players with bright futures, but they aren’t franchise guys. However, Wiseman gives them a forceful rim protector and a guy that can serve as a rim runner in the short term but could expand his game down the line. I’m not a huge Wiseman guy at all, but the Hornets want a big and he brings all the athletic tools and mobility to one day perhaps be a star.

I have seen a ton of potential trades for the number two overall pick and they’re all quite poor. The ideal move would be to move back in the draft and require a win-now player that can make an impact. Since they don’t do that, I have them taking Israeli forward Deni Avdija. Avdija is an extremely versatile player with a great feel for the game. He can handle the ball in the open court, make plays for others, move and relocate off the ball, and play fundamental defense. His biggest weakness is his shooting ability, but Golden State is great at developing shooters. Contrary to popular belief, I think Avdija is a relatively safe pick. He doesn’t thrive in one area but is solid to good in almost every facet of the game outside of shooting. I think he can be a win-now piece for Golden State while also being a part of their future core.

Minnesota is in a very intriguing spot at pick #3. They could look to pair Karl Anthony Towns with a versatile big like Onyeka Okongwu. Or they could snag an off-ball guard with a high basketball IQ like Tyrese Haliburton. Whatever the Timberwolves decide to do here should be great for their team but I think Anthony Edwards is the move for them. He’s a bruising slasher with incredible three-level scoring ability. I think this would be a great move for Edwards to develop the rest of his game. He could come in and be a third option offensively right away and be able to get shots and touches, but he won’t carry such a heavy scoring load. This could allow him to start taking more pride in his defense and working on setting up his other teammates. It’ll be interesting to see what they choose to do on draft night.

The Chicago Bulls are eyeing a playmaker with this pick. They’ve expressed interest in Deni Avdija but he’s off the table. I think Lamelo Ball is the only selection that makes sense. Zach Lavine and Coby White are talented players but I see them more as complimentary guards. Neither of them possess the natural playmaking instincts that Ball has and they lack the upside. Ball brings elite passing ability, top-tier ball handling, and excellent scoring upside. His concerns with his shooting ability are real but I personally believe he’s going to be a much better shooter in the NBA than he was in Australia. Picking for “fit” when you were the 11th seed in a weak Eastern Conference just makes no sense either. Ball is my top rated prospect and I think he’s going to do wonders for the city of Chicago.

Cleveland really likes Deni Avdija with this pick, however, he’s off the table. They’ve also expressed that they are interested in college basketball’s best player, Obi Toppin. Toppin is a mature, NBA ready pro with all the offensive tools to make it work at the next level. He’s an inside-out threat with incredible athleticism and vertical pop. I have questions about his ability to defend pretty much anyone, but the athletic tools are there and I think you can make it work. His offensive skill and athleticism has to intrigue Cleveland.

Patrick Williams has been generating a lot of buzz lately and will almost certainly be a top 10 selection. His numbers at Florida State don’t pop off the page but Williams feels like a relatively safe risk to take. He’s got an incredible body with elite physical tools, but also showed some flashes of great offensive talent. He can score off the dribble, out of the PNR, and in isolation scenarios. He’s also a great defender who can guard multiple positions. His sample size is pretty limited but teams are impressed enough to roll the dice on him. I really want to drive this home but in this draft, you have to swing for the fences, and Patrick Williams could be a home run if developed properly.

Killian Hayes is 2nd on my big board and I love his fit in Detroit. They’re seeking a playmaker to kickstart their rebuild and Hayes brings all the shot creation skills and passing ability to be a franchise player. He’s someone that you’d likely have to give the keys to the offense to right away but that’s not a bad thing. He has a level of maturity and understanding for the game that you don’t usually see in 19 year olds. He’s still very raw but that’s almost not a bad thing at all. Detroit is in dire need of a franchise guy and who better off to start their rebuild then the French southpaw, Killian Hayes.

The Knicks are in a tricky predicament here. Going best pick available would make a ton of sense but I think Isaac Okoro could be their guy. His defensive-minded skill set could make him an asset, even though his lack of spacing really hurts the Knicks. He can continue his prowess on the defensive end while working on rounding out his offensive game. New York likely won’t be sniffing the playoffs for the next couple of years so Okoro has plenty of time to grow. I don’t love the pick as I’m personally not an Okoro believer but nonetheless, I think his contributions are needed in New York.

Okongwu is a versatile, hyper-athletic big man who has shown flashes of being much more than the prototypical big man role that he played at USC. He’s got a soft touch around the basket and he’s extremely agile. He can also guard multiple positions and is arguably the best rim protector in this draft. His ability to score off the dribble and create offense will be the deciding factor for his upside but he’s shown enough flashes both offensively and defensively to be worthy of a top 10 draft pick.

With the recent trade that sent Chris Paul to the Phoenix Suns, the point guard position is no longer an area of need. The Suns will likely be looking to compete for the playoffs next year and one guy that I think can help them do that is Aaron Nesmith. He’s a lights out shooter with legitimate NBA range. He can come off screens and off ball actions and serve as a floor spacer. He’s shown some raw ability off the dribble but I don’t completely buy that yet. Regardless, Nesmith’s shooting and improving defense should make him an asset, and I think he’s the pick for the Suns.

Something that I’ve heard over the past couple of days is that the Spurs really like Jaden McDaniels. McDaniels is a talented wing scorer who has shown that he can create his own shot effectively and score from all over the floor. He’s also an extremely versatile defender who has proven he can hold his own against quicker and shiftier guards. One of the big issues with McDaniels is that while he’s extremely talented, he’s also incredibly raw. The Spurs have a knack for finding great talent and developing players. I think McDaniels fits well with their young core of guards and I think he could end up being a potential star in San Antonio.

The Kings are in dire need of a spark, which is why I personally believe they should look to trade up. However, I can’t imagine that, and I think they take a quality 3-and-D wing in Saddiq Bey. Bey provides elite three point shooting and awesome perimeter defense. However, he’s also displayed that he’s a high IQ player who can set his teammates up for buckets occasionally, get active on the glass, and create his own shot off the dribble. I don’t see Bey ever being a quality shot creator, but I think he’s a tremendous complimentary player next to budding star De’Aaron Fox.

Tyrese Haliburton is projected to be a top 10 pick in this NBA draft. His combination of playmaking, perimeter shooting, and defensive intensity makes him an intriguing player. However, someone is going to fall outside of the top 10, and I think Haliburton could be a potential candidate. But why the Pelicans? Well, as great as Lonzo Ball is, we don’t really know if he’s a franchise point guard. If he doesn’t take strides in his fourth season, I could see the Pelicans taking a player like Haliburton as a backup guard. The two have a very similar skill set and Haliburton would be a tremendous fit alongside Brandon Ingram and Zion Williamson. If Ball doesn’t take a leap in year four, the Pelicans could start to look in a different direction. And I think Haliburton could be just their guy.

The Celtics love to take dominant high school prospects who disappointed in their first college/international season. RJ Hampton fits that description and if there’s anyone who can tap into his upside, it’s Boston. He’s got great athletic tools that make him a terrific slasher when attacking the basket and his three point shot looks promising despite poor percentages 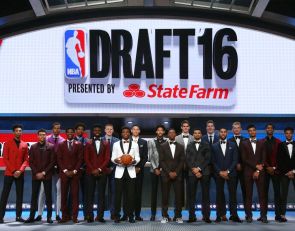