There's Uncertainty Around an Israel Adesanya and Jon Jones Fight

There's Uncertainty Around an Israel Adesanya and Jon Jones Fight

The Last Stylebender and Jonny ‘Bones’ Jones are arguably the two best fighters in the UFC right now. Israel Adesanya is a new age, flashy, thin, kickboxer from New Zealand who has captured the fans heart’s with exceptional entrances and the dazzling striking to back it up.

Jon is an athletic freak of nature who probably could have had a profession in football (like his 2 brothers) even if he never put on a glove. These two powerhouses of the UFC are always rumored to fight, but have not due to numerous reasons thus far in their careers. This fight is bound to happen one day though, isn’t it?

The main reason for this fight not happening is because of the weight class issue. Israel is a 185 pound middleweight, while Jon is a 205 pound light heavyweight. This has not been an issue for other major superfights in the UFC, so why this one you ask?

Israel probably would have an issue making the light heavyweight target weight of 205 due to his thin frame. Jon would have immense trouble getting down to 185 pounds to fight Israel. The most common scenario in this instance of these two ever fighting would likely have to be at a catch weight somewhere in the middle. Seeing that Jon is the bigger fighter, he is most likely not willing to cut all of the weight and potentially lose some of his power going into the fight.

This fight could be huge for both of these fighters legacies. Israel’s legacy is less cemented than Jon’s, as he has just entered the UFC in 2018, but he is still an undefeated mixed martial artist standing at 19-0 overall. He has been dominant in other promotions across the world, but the UFC is the only way this fight can happen.

Israel has stated that he wants to clean out the middleweight division before he goes up to fight Jon, and this is something that may benefit the fans in the long run. He wants more time in the Octagon to hone his skills out of the respect he has for Jon’s skillset. This could also have a downside if Israel either falls off or the amazing talent in the rest of the middleweight division catches up to him.

Jon Jones is known as the greatest mixed martial artist ever to a lot of people, so his legacy is solidified. He was the youngest to ever win a UFC title at 23, and at age 32, he still hasn’t missed a beat. Jon is 26-1-1, but most view him as undefeated. His loss came via disqualification from illegal 12-6 elbows that he finished his opponent Matt Hamill with, and Matt did not want to continue after those blows.

Jon’s other chink in his armor comes from a match in which he won handily, but was soon ruled a no contest due to a post fight drug test he did not pass. This leads us into another topic that can be brought up on if this fight will ever happen… will Jon Jones be available to fight once Israel is ready? Jon has had numerous issues outside of the sport that have derailed his career. He seemingly bounces back from all of them, but if it continues, there may never be a superfight.

If these two were to fight in 2021 as it’s been rumored, Jon Jones will dominate Israel Adesanya. Jon is the much bigger and stronger fighter with a longer reach and an overall more technically sound game. Israel is still a kickboxing phenomenon, but Jon has implied he will not keep the fight on the feet. He has every intention of getting him to the ground and dominating the fight, which he has shown time and time again the ability to perform.

Even if they were to keep the fight standing, Jon has arguably the deepest array of striking we have seen in the UFC. As of now, I don’t see a scenario in which Israel is able to handle everything that Jon will throw at him. A flash knockout will be his only way of winning, which is what we say about every opponent that goes up against Jon Jones, so hopefully we will one day get to see it.

If Israel comes up to Jon’s weight class and beats him, does that make him the GOAT? If Jon beats Israel, is this just another notch in his belt? Jon stated that Israel is ‘what’s hot right now’ while he is ‘a household name in combat’. Is this Jon’s way of saying that he is not worried about Israel at all?

Israel is the one who started stirring all of the commotion up to begin with, so is he just a pest to Jon? Is this a bigger play by Israel to use Jon’s name for publicity and possibly take another superfight? He is managed by Paradigm Sports, who also manages the face of the UFC, Conor McGregor. Is Conor vs Israel the more realistic of the two headlines? These are questions we do not have the answer to right now, but we will be waiting patiently for them to be revealed. 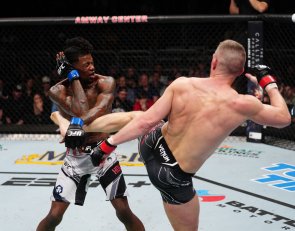