With the MLB season officially over, free agency is now upon us. Unlike the NFL and NBA where the big pieces in free agency fall very quickly,  free agents in the MLB may wait until January or February to sign.

After the biggest dominoes fall, most fans are left wondering who they’re team should sign outside of the big names. Every year we see under the radar signings make big contributions across the MLB.

This year, the two biggest prizes for starting pitchers are Stephen Strasburg and Gerrit Cole. There are 30 teams in baseball, and that means 28 teams will be left empty handed, but that doesn’t mean there aren’t plenty of great valuable additions to be found on the market.

In this article, I will list four pitchers who are not superstars, but can still be a valuable addition to your team’s roster.

I am also leaving out names like Hyun-Jin Ryu and Madison Bumgarner because they’re market value may not be far off from Cole and Strasburg and are premium names on the market.

While they may not be offered ten year deals, it is not hard to imagine them getting $26 or $27 million dollars a year compared to others on this list where that would be considered an over pay.

The latest report on the former New York Met is that he has offers exceeding $100 million over 5 years according to the Athletic’s Ken Rosenthal. Wheeler has shown to be a very consistent pitcher in his career.

Take away his 2017 season, his first back from Tommy John Surgery, and he has had an ERA under 4.00 in every season of his career. Wheeler’s injury history is his biggest concern, especially coming off a season where had a career high in innings. If Wheeler stays healthy, you have a consistent starter and a legitimate number three come October.

Not very often do you see a player with Keuchel’s resume sitting on a list like this at only 31-years-old yet, here we are. The latest rumors around Keuchel seem to suggest that every fringe-postseason team like the Cubs, Brewers, and Blue Jays are interested in the former Cy Young winner.

Keuchel doesn’t appear to be the dominant pitcher he once was, but he’s far from a liability. He’s coming off a very solid season with Atlanta where he went 8-8 with a 3.75 ERA, in slightly over 112.2 innings. What may be most enticing is his career 3.47 postseason ERA.

Keuchel may not be the same pitcher that won a Cy Young, but a team on the postseason bubble could always use a reliable starter with Keuchel’s resume.

Whoever ends up with Alex Wood could be lauded as a genius. Wood had an injury plagued 2019 season, but before that, he had been fantastic. He suffered a back injury in spring training and did not return until late July.

In Wood’s 7 starts, he was atrocious posting a 1-3 record along with a 5.80 ERA before getting shut down for the rest of the season. Prior to this season, Wood was a reliable starter who had an ERA above 4.00 only once in his career.

Wood’s injury issues are an obvious concern, but when Alex Wood is at his best, he is a top end starter. In 2017, Wood had 25 starts and finished with a 16-3 record and a 2.72 ERA. If Wood stays healthy, he’s a flier that can pay huge dividends.

Gio Gonzales will not do anything spectacular. Unlike Wood, Gonzales is past his days as a top end starter. With that said, Gonzales is one of the safest pitchers in baseball.

The former All-Star is coming off of an injury riddled season with the Brewers, but he was very productive when healthy. Gonzales had a 3.50 ERA in only 17 starts but his track record speaks for itself.

When Gio Gonzales is on the mound, you’re not expecting anything exceptional, but you know you’re getting someone reliable, which is something all teams crave in their 4th or 5th starters. 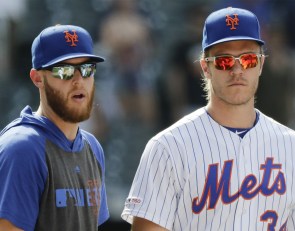