Last week, USF went on the road to face Georgia Tech where they lost 14-10.

Blake Barnett started the game after a three and out forced by the Bull’s defense. On his first play, Barnett completed a pass for seven yards to RB Johnny Ford. The next eight drives led by Barnett resulted in one field goal and seven punts. It was obvious that Barnett was struggling to convert downs against the Georgia Tech Defense.

On USF’s 9th drive, they decided to see if backup Quarterback Jordan McCloud could fair any better than Barnett. McCloud finished the drive with a 20 yard touchdown pass to Johnny Ford. When the Georgia Tech offense received the ball, the USF defense was able to force a fumble.

USF decided to play the hot hand and kept McCloud in. McCloud opened the 10th drive of the game with a 54 yard pass to TE Mitchell Wilcox to make it 1st and goal. USF failed to punch the ball into the end zone and the drive ended with a fumble by RB Jordan Cronkrite.

Unfortunately, the Bulls were not able to score any more points and ended the game with another loss falling to 0-2 on the season.

In his week 3 press conference on Monday, Charlie Strong was asked about the QB situation, and he had this to say, “Turn it into a competition. Let those two guys go in and just see who’s going to come out and whoever plays, you get an opportunity this week in practice and then in the game and we’ll put the right one out.”

After his performance on Saturday, I can see USF choosing to start McCloud and see what he can do when he is given the opportunity to start. 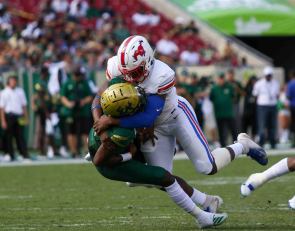 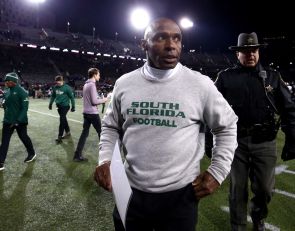