This past week, Ezekiel Elliot missed training camp to negotiate a new contract with the Dallas Cowboys. This may have given fantasy owners a flashback to last year where Leveon Bell held out for the entirety of the NFL season. Fortunately, I predict that Elliot will get this contract done before the new season and will not be sitting out like Bell. The main difference is that Elliot is still under his rookie contract and has two years left on his current deal.

If Elliot chooses to sit out the 2019 season, he will still be under contract for two more seasons with the Cowboys. There is no benefit to Elliot sitting out a year and losing money as well as a year of his prime. The news of Elliot’s holdout may make other owners in your fantasy league wary to get him, and I see Elliot falling to the second round in most 8-man leagues. If you can draft him in the second go for it, but it will be a reach drafting him in the first round.

While at training camp, A.J Green tore ligaments in his left ankle that will likely keep him out of commission for six to eight weeks. If you regularly pick A.J green, you are aware that it is expected of him to end up injured and miss a number of games. Last year, he missed the back-end of the season with a leg injury and this year he will miss the first couple of games with an ankle injury.

When Green eventually returns, I believe he will be a solid performer for fantasy gathering at least 10 points per week in standard leagues. With his injury, I value him as a low second round and high third round pick in an eight man league.

After contract negotiations with the Chargers failed, Melvin Gordon is sitting out of training camp and has requested a trade. In the current running back market, there will be no team hopping on the phone to trade for Gordon. The Chargers’ running back is in the last year of his contract, so I believe he will sit out at least half of the year and then become a free agent next year. This holdout should tank Gordon’s value and bring him down to a high third and low second in an eight man league.

Tyreek Hill bruised his quad in training camp this past week. This is a minor injury, and I am confident that Hill will be ready to go by week one. This injury should not fear any fantasy owners if he is still on the board, I have a Hill as a lock for round two and late round one.

The Buccaneers have been having running back troubles in the past year after disappointing performances by Peyton Barber and Ronald Jones. This leaves room for undrafted free-agent Bruce Anderson to enter the starting lineup. If Anderson can manage to become a starter, then he will definitely be better fantasy wise than any other committee running back. As many people are not aware of Tampa Bay’s running back situation, he should be safely picked up from the waiver wire. If he manages to become the starting back, I can see him becoming this year’s Philip Lindsey. 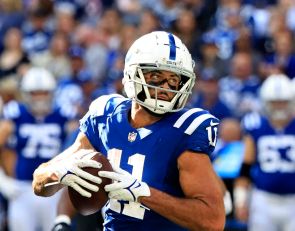