Eli Manning and the Giants' Future at QB

Eli Manning and the Giants' Future at QB

The New York Giants have a major issue on their hand that they failed to address during the offseason. As of right now, it looks like Eli Manning’s career is winding down. His throw power and accuracy are slowly diminishing, and he has taken quite a beating early in the year. The problem for the Giants is they do not have a suitable QB to take over the reigns once Eli is done. The Giants had the opportunity to bring in a potential replacement, but they passed at every opportunity.
There were QBs in free agency available to the Giants, such as Teddy Bridgewater, who could come in and compete for the starting job, but the Giants did not pursue that. The Giants then had a second opportunity to acquire a QB at the NFL Draft. At the 2018 NFL Draft, the Giants held the 2nd overall pick and had the chance to draft Sam Darnold who could potentially be the next franchise QB. The Giants instead decided to go with RB Saquon Barkley with the 2nd pick, which could prove costly for them. Barkley has been phenomenal through the first six games of the season and will most likely win Offensive Rookie of the Year, but the Giants’ biggest need was not a RB. They desperately needed a replacement for Eli Manning, but they decided to prioritize talent over need by selecting the best talent available in Saquon Barkley.

Something obviously went wrong for Eli Manning along the way. He started the 2017 season off fine in his first four games with a 70% passing completion. His TD to INT ratio was not great at 6 TDs to 4 INTs, but this had more to do with a lack of a running game as well as not great depth at receiver. Eli came undone in week 5 against the Los Angeles Chargers. This Chargers game seems to be where it all went wrong. In this game, Eli was sacked 5 times by the Chargers’ lethal pass rush. Eli might have aggravated an injury here on any of these 5 sacks, or he might have become paranoid to the pass rush, but that does not seem to be the problem. The heart of the problem appears to be that four Giants’ receivers went down with injury in this game. In this game against the Chargers, Odell Beckham Jr., Brandon Marshall, and Dwayne Harris all went down with season-ending injuries, while Sterling Shepard also went down with an injury that would cause him to miss a few weeks. The Giants were 0-4 entering that Chargers game and losing four receivers certainly did not help them rebound.
Eli Manning ended up getting benched later in the season during week 13, but this benching only lasted for one week. Geno Smith came in and proved that he was not the answer at QB for the Giants. This game also showed that the Giants needed a lot of help on the roster. In the last four weeks of the season, Eli did have one game where he threw for over 400 yards, but every other game was nothing special. That benching might have taken Eli out of his rhythm for that final stretch of the season. Manning has been able to somewhat bounce back in the 2018 season with an okay start, and that mostly has to do with the additions to the team. 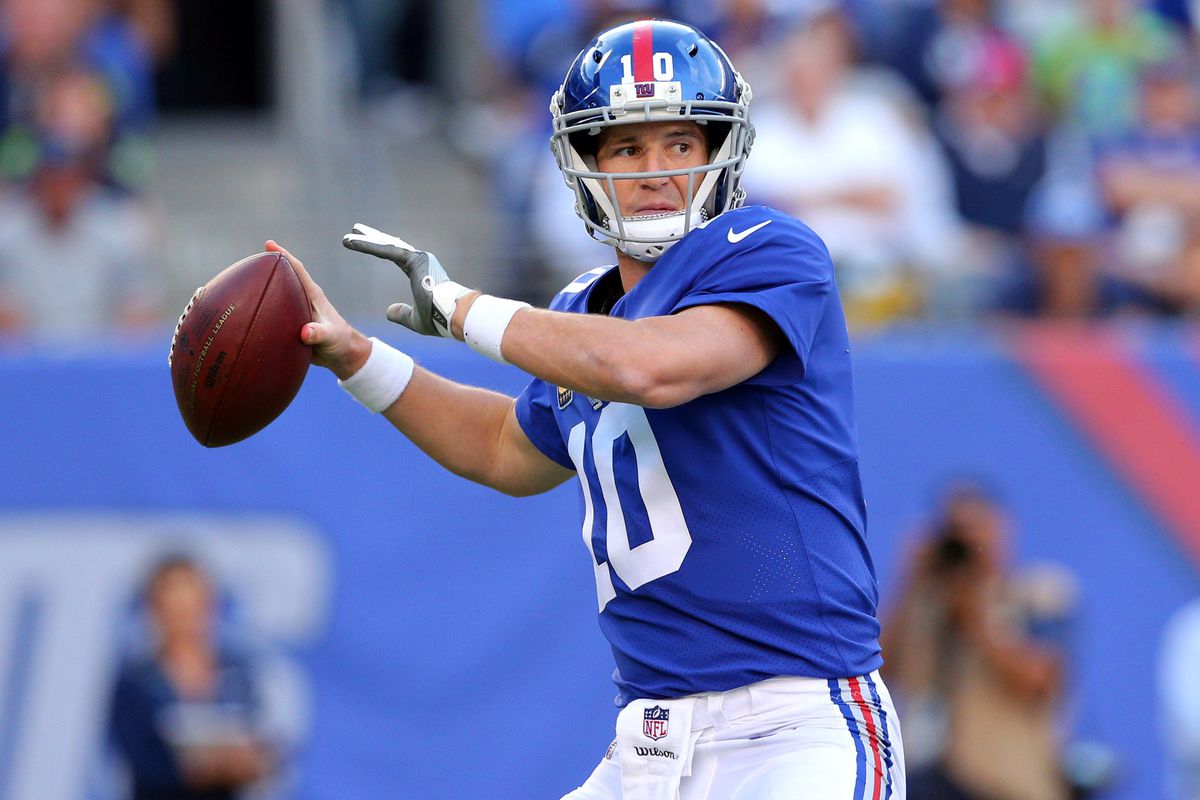 He has shown sign of improvements this season with a rushing attack, a healthy wide receiver corps, as well as an improved offensive line. You can argue whether the Saquon Barkley pick was the right pick or not, but the one selection you cannot argue with is OL Will Hernandez. Hernandez has provided stability to that offensive line and ensured better protection for Eli as well as great running lanes for Barkley. Nate Solder has proven to be a bad free agent signing as he is not playing to his contract, but Hernandez has been a great pick up.
Even with the additions of Barkley and Hernandez as well as the return of Odell Beckham Jr., the Giants still have a lot of work to do. They do not have a suitable replacement for Eli, so they have to ride it out with him. It seems like the Giants only other option at QB is 4th round pick Kyle Lauletta. He will most likely not be able to play this season as the Giants would rather let him watch and learn in his rookie year and not rush him into the starting job. If Eli has another game like he had against the Eagles, where he had a completion percentage of 55.8%, then Lauletta might have to be forced into action. The Giants can stick with Eli if he can have a game similar to the one he had against the Houston Texans where he passed for nearly 300 yards and had a completion percentage of 86.2% to secure the Giants’ only win of the season. Eli Manning can finish the year as the Giants’ QB if he can play remotely close to that Houston game. With a 1-5 record, the Giants have most likely given up on the season and are just trying to secure a high draft pick. The plan right now for the Giants is probably to let Eli finish the rest of the year and then select a QB with their first-round pick in next year’s draft. The offensive gameplan has to change, though. Saquon Barkley needs to become the primary offensive weapon. He is going to need at least 30 touches a game with most of that coming off of carries and the other touches coming from screens and short routes. Eli cannot be relied on to make any deep throws, which is a bad sign considering how much OBJ is making, but Odell will play to his contract next year when a younger QB comes in.
The best way to use Eli is going to be to run short routes and rely on Saquon Barkley. Eli has rebounded this season, but the main problem last year was a banged up receiving core and an unstable offensive line. The Giants had a chance to be 3-3 on the season. They lost to Carolina because of a 63-yard field goal, gave up 6 sacks in a 7-point game against Dallas that could have gone differently if Eli had better protection, and they only lost to Jacksonville by 5 points. This is a team that does need to improve, and they will end up having a high pick in the 2019 draft, which should help improve the team. The Giants will be competitors in a few years once they draft their franchise QB in the 2019 draft, add to the offensive line, and also create some depth on the defense. Eli Manning is not the long-term QB for the Giants, but he will have to finish out the year as the #1 option. The Giants are doing a good job at stockpiling young talent, so once they find that franchise QB, they will be at the top of the division again. The Giants will be forced to stick with Eli until next season when they should have Eli’s replacement on the roster.