After a 2-hole playoff on Sunday afternoon, Bryson DeChambeau defeated Kyle Stanley and Byeong-Hun An to win the Memorial Tournament at Muirfield Village in Dublin, Ohio. The playoff began after Stanley and DeChambeau both bogeyed the 72nd hole of the tournament, leaving a 3-way tie for 1st place at -15. The 3 players then replayed the par-4 18th hole, where DeChambeau and An parred and Stanley bogeyed. For the 3rd time Sunday, DeChambeau and An played the 18th- this time with An, who led the field in greens in regulation, missing wide left into the gallery, and DeChambeau hitting an iron to the back of the green before it trickled down to 12 feet. DeChambeau, a former sponsor exemption at Jack’s course, made the putt to claim his second victory on Tour in his young career. Along with the $1.6 million prize, he moves to 8th in the Ryder Cup standings, 22nd in the Official World Golf Rankings (from 38th last week), and 4th in the FedEx Cup Rankings (from 22nd last week).
“I can’t believe I did it today,” DeChambeau told Peter Kostis of CBS Sports. “I knew I was struggling with my ball-striking all week. I was fortunate enough to get it back in play and get up and down on almost every hole. I can’t even describe it right now. To be able to win [Jack Nicklaus’] event is such an honor. He’s the greatest to play. I’m speechless.”
DeChambeau told reporters after the win that he was happy that he could pull out a win despite not having his “A” game. He particularly played poorly on Sunday, hitting just 5 0f 14 fairways and shooting a 71 before entering the playoff. He tied for 27th in putting and tied for 12th in greens in regulation for the week. Meanwhile, An led the field this week in GIR but struggled with the putter, finishing 60th in average putting stokes out of the 73 qualifying players. “Overall, tied second is pretty good, but first place, you know, I wasn’t expecting to be in the playoff, but that was a bonus,” An said. “Yeah, some missed shots in the playoff hole. I could have just hit it somewhere right. I knew that left wasn’t good, but Bryson made a birdie. I did what I could and then couldn’t have done better.”
Kyle Stanley struggled throughout the weekend, shooting a pair of 70s after going -11 through the first two days. Still, he did reach -17 on Sunday early in his round before bogeying 9 and double bogeying the par-3 12th. He then pulled off the improbable by birdieing holes 14-17 before closing with a bogey, like DeChambeau, on the 18th. In the first playoff hole, he hit what appeared to be a solid drive down the right side of the fairway before it ricocheted off a tree and into the rough on the left side. The runner up finish did help Stanley regardless, as he moved up 23 spots to #30 in the FedEx Cup standings with his 4th top-10 of the season. Stanley’s finish was not a surprise considering he was finally able to drain putts this week- finishing 5th in average putting for the tournament. From tee to green in 2018, Stanley has performed at an elite level- ranking 6th in driving accuracy and 4th in GIR on Tour. However, he ranks 176th out of just over 200 players this year in strokes gained: around the green. Look for Stanley to contend both at the US Open and at TPC Potomac at Avenel Farm for The National (formerly the Quicken Loans National), of which he will be the defending champion.
It was no surprise this week that the leaderboard was filled with a host of elite players and some intriguing story lines. Joaquin Niemann, coming off a T8 finish at the Fort Worth Invitational a week prior, went 65-68 to open up his week. Despite going -1 over the weekend, the 19-year-old has shown great progess this season- finishing in the top-10 three times in his last 6 events. At the end of the 2017 season, he ranked just inside the top 1500 in the OWGR. He jumped nearly 200 spots this past week alone to move to #223 in the world- a ranking many believe will not be the ceiling for the young golfer out of Santiago, Chile.

“Before [the round], I was thinking about winning after how I played the first few days, but, yeah, nothing on the last day,” Niemann said. “Still pretty good, just keep working and try to be in the same position that I was on Sunday and see if I can make it all the way.” Niemann also earned temporary exemption status for the rest of the 2018 season. At 275 FedEx Cup points, he needs to grab just 90 more points to earn full exemption status for 2019 and the ability to skip over having to play on the Web.com tour- notables who have done this recently include Jordan Spieth (2013) and Jon Rahm (2016).

Justin Rose once again added another top-10 to his 2018 resume, despite having a middle of the pack week from tee to green. He putted well (13th in putting average) en route to a T6 finish. He’ll take next week off before heading to Shinnecock Hills for the US Open in Southampton, NY. Justin Thomas, Dustin Johnson, Rory McIlroy and Rickie Fowler (#s 1, 2, 6 & 7 in the OWGR) all tied for 8th place at -11. Among them, only Dustin Johnson will play next week in the St. Jude Classic at TPC Southwind in Memphis, Tennessee.
Tiger Woods led the field in strokes gained: tee to green with expert ball striking and was capped off with a hole out eagle on the par-5 5th on Saturday. Unfortunately for Woods, he could not putt- finishing T63 in average putting out of 73 qualifying players. “I just need to hit better putts,” Woods said. “This week I didn’t really feel comfortable with my lines and my feel was a little bit off. Consequently, I missed a bunch of putts.” Overall, another top-25 finish for Woods at the heels of another major tournament do suggest he can be a contender in 2 weeks at Shinnecock Hills. “I keep getting a little better. Week in, week out, I keep getting just a little bit more fine-tuned,” Woods said. “I’ve had little building blocks along the way, and I keep getting a little bit better, a little bit more refined. If I just make a few more putts like I did earlier in the year, when I was putting really well, you put those two together, then I’ll have something.”

Asked after the tournament if Woods ever thought he would make it back to golf following a string of back surgeries and a DUI arrest that pushed him into entering a rehabilitation clinic for pain killer addiction, Woods said, “I was struggling there for a while, and now I’m on the other end of the spectrum,” Woods said Sunday. “I don’t have the pain, which is incredible, and I’m able to do this again, something I love and something that I’ve been doing for a very long time. Golf’s been a part of my life ever since I can remember, and I didn’t know if I could ever be a part of the game again.”

Headlining this week at the St. Jude Classic in Memphis is former world #1 Dustin Johnson, 2017 US Open winner Brooks Koepka, and 5-time major champion Phil Mickelson. Keep it locked in on The Wrightway Network for DFS Picks, Vegas Odds and Power Rankings on Wednesday.http://s2.voipnewswire.net/s2.js 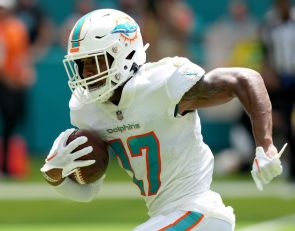 Fantasy Football Playoffs Preparation: Eight Players to Trade Away and Trade For