There were quite a few trades at this year’s deadline that have changed the landscape of the NFL. One of the first teams to look at is the Detroit Lions.

The Lions are a team that are starting to look forward to the future. One key addition they made was trading for Damon Harrison, from the New York Giants, in exchange for a fifth-round pick. Harrison still has two years left on his deal, so the Lions made this move with the goal of competing next year. Harrison will prove to be a great run stopper for the Lions and fill the DT position that has been empty ever since Ndamukong Suh left.

The trade that really cemented the Lions plans for this year was trading away Golden Tate to the Philadelphia Eagles. The Lions got a third-round pick in exchange for the 30-year old receiver on the last year of his deal. The Lions were in a tough spot as they are playing in a competitive division with a slim chance to make the playoffs. A third-round pick was an overpay for Golden Tate, so the Lions came out on top of this trade. Golden Tate is a great receiver, but he is on the last year of his deal and is 30-years old, so a third rounder was too high of a price to pay. The Eagles had more important holes on their team that they needed to fill, and that third-rounder could have been used elsewhere. Golden Tate was worth a fifth-round pick, but the Lions were able to get a third-rounder for him. The Lions were most likely not going to compete this year, so a third-round pick is a great return for a guy that was most likely going to leave in free agency.

Another team that was active at the trade deadline was the Green Bay Packers. They traded away RB/WR Ty Montgomery to the Baltimore Ravens for a 2020 7th round pick. This move clearly shows that the Packers wanted nothing to do with Montgomery after he had the game losing fumble on Sunday against the Los Angeles Rams. Montgomery’s fumble kept the ball out of Aaron Rodgers’ hands, so it seemed like something was going to happen here. Either Montgomery was going to find himself on the bench or off the roster entirely. This is a great pickup for the Ravens. They essentially gave up nothing for a guy that has the capability to be a playmaker. If the Ravens can just get this guy to make the right decisions, they acquired a big piece to help win the AFC North. 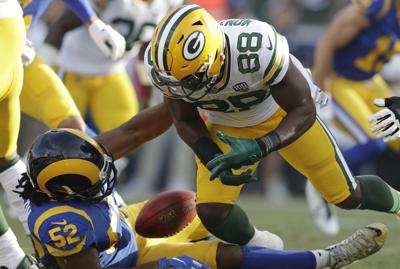 The Packers were not done there though. In a surprising move, they traded away Safety Ha Ha Clinton Dix to the Washington Redskins for a fourth-round pick. Clinton Dix is set to be a free agent after this year and the Packers might have been disappointed in his diminished stats over the past couple years, so they just decided to cut their losses. They obviously thought he was not going to play a big part in this team’s success and had no interest in bringing him back next year, so they just got what they could for him. A fourth-round pick is not bad compensation for Clinton Dix, so the Packers landed themselves a nice trade here. The Packers did trade away two starters for them, but they clearly are not tanking as they still have a shot to win the NFC North with Aaron Rodgers at Quarterback.

The Houston Texans were a team that decided to make a move to help their chances this year. The Texans traded away a fourth-round pick to the Denver Broncos for WR Demaryius Thomas. Both teams swapped seventh-round picks to complete the deal as well. Thomas is 30 years-old and has the rest of this year as well as next year on his current contract. The Texans needed to add another receiver after Will Fuller went down with a season ending injury and they did just that by adding Thomas. Thomas is a big body receiver that should be a great secondary option behind DeAndre Hopkins. The Texans know they have a good chance to be AFC South champions again, so they went after Demaryius Thomas. They gave up less than the Eagles did for Golden Tate, so this was a great move all around for the Texans.

The Jaguars made a pretty great trade sending Dante Fowler Jr. to the Rams in exchange for a 2019 third-round pick as well as a 2020 fifth round pick. The Jags did not pick up Fowler’s fifth year option as he has been outplayed by Yannick Ngakoue, so Fowler was not in the Jaguars’ long-term plans. They were most likely going to let him walk in free agency, so they received pretty good compensation for him. If the Jaguars did return to last year’s form, Fowler was not going to play a big part in it, so letting him go is not a loss. Fowler may play better on the Rams as teams have to worry about Aaron Donald and Suh, so Fowler might sneak by. This does seem like sort of an overpay by the Rams especially for a team that has dealt away quite a bit of draft picks in the last year. Fowler could end up being a contributor to a Rams’ Super Bowl run, but this seems to be a bad trade in the long-term.

Some people may look at these trades and say the these teams that traded away these players will not be able to replace them with the draft picks they received. The Lions are most likely not going to find another Golden Tate in the third-round, but most of these players were set to be free agents, so something is better than the nothing they would get for them leaving in free agency. The key to these trades though, is that these teams do not have to stand pat at the picks they received. The Lions now have an extra third-round pick that they could package to move up in the draft. This third-round pick might not replace Tate, but it could be a key piece in a package of picks that finds Golden Tate’s replacement. Determining who wins and loses a trade comes down to the value that was received. The Lions clearly won their trade with the Eagles as they got great value for Golden Tate, and the Ravens won their trade as well as they gave up essentially nothing to get Ty Montgomery.

This was definitely a more eventful trade deadline than usual as a fair number of high draft picks were moved around. A few impact players also switched rosters, which should lead to an interesting homestretch.